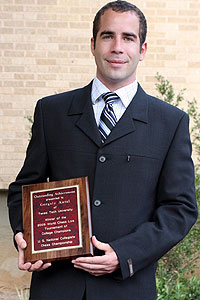 International Master Gergely Antal, an economics major at Texas Tech and member of SPICE, placed first at the Southwest Open.

International Master (IM) Gergely Antal, an economics major at Texas Tech and member of SPICE, placed first at the tournament, which took place over the Labor Day weekend and drew 245 players.

Antal, who was fresh off his national collegiate championship title in Indianapolis in August, scored six points in seven games with no losses to clinch the title. He yielded only two draws – both from Texas Tech teammates and roommates, IMs Davorin Kuljasevic and Gabor Papp.

This is the second straight major championship where Texas Tech players have finished ahead of two of the nation’s most powerful chess teams – UTD and UTB.

Paul Truong, director of marketing at SPICE, said the members of SPICE who played in the Southwest Open went on their own expense because the Student Government Association’s funds cannot be used to fund non-college tournaments.

“This is essential in order to keep the players in good shape by having them play in strong tournaments,” Truong said. “This is quite an accomplishment considering the youth of the chess program at Texas Tech and it is a great advertisement for the university.”