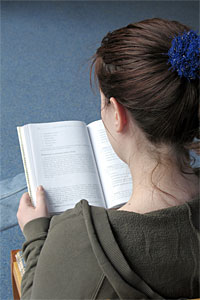 All readings are held at 7:30 p.m. in auditorium 001 of the English Building and is free and open to the public.

The Creative Writing Program in the Department of English will present seven authors this fall during the 2009-2010 Reading Series.

All readings begin at 7:30 p.m. in auditorium 001 of the English Building. They are free and open to the public. For more information, visit the Reading Series 2009-2010 Web site.

Phillip Lopate: Sept. 24. Novelist and essayist Phillip Lopate has written three personal essay collections, two novels, “Confessions of Summer” and “The Rug Merchant” and many other books. His grant awards include a John Simon Guggenheim Fellowship and two grants from the National Endowment for the Arts (NEA). He currently holds the John Cranford Adams Chair at Hofstra University, and teaches in the MFA graduate programs at Columbia University, the New School and Bennington.

John Poch and Kurt Caswell: Oct. 1. John Poch is the director of creative writing at Texas Tech. His most recent book is “Dolls.” His previous book, “Two Men Fighting with a Knife” won the Donald Justice Award. His first book, “Poems,” was published in 2004 and was a finalist for the PEN/Osterweil prize. Kurt Caswell is a writer and an assistant professor of creative writing and literature in the Honors College at Texas Tech. He won the River Teeth Literary Nonfiction Prize in 2008 for “An Inside Passage.” He is the author of “In the Sun’s House: My Year Teaching on the Navajo Reservation” and lead editor of “To Everything on Earth,” an anthology of nature writing forthcoming from Texas Tech University Press.

Marie Howe: Oct. 22. Marie Howe is the author of three volumes of poetry, “The Kingdom of Ordinary Time,” “The Good Thief” and “What the Living Do.” She is the co-editor of a book of essays. She has been a fellow at the Bunting Institute at Radcliffe College and a recipient of NEA and Guggenheim fellowships. Her poems have appeared in The New Yorker, The Atlantic, Poetry, AGNI, Ploughshares, Harvard Review and The Partisan Review, among others. Currently, Howe teaches creative writing at Sarah Lawrence College, Columbia and New York University.

Gerald Stern: Oct. 29. Gerald Stern’s recent books of poetry include “Save the Last Dance: Poems,” “Everything Is Burning” and “This Time: New and Selected Poems,” which won the National Book Award. His honors include the Paris Review's Bernard F. Conners Award, four National Endowment for the Arts grants, and fellowships from the Academy of American Poets and the Guggenheim Foundation. Elected a chancellor of the Academy of American Poets in 2006, Stern has taught at many universities, including Columbia, New York University and the University of Pittsburgh.

Jacqueline Kolosov and William Wenthe: Nov. 19. Jacqueline Kolosov is an associate professor of creative writing at Texas Tech. Her poetry collections are “Modigliani’s Muse” and “Vago.” Her young adult novels are “A Sweet Disorder,” “The Red Queen’s Daughter” and “Grace from China.” She has been a recipient of an NEA fellowship in fiction. Her poetry and prose have appeared in journals including The Southern Review, Poetry and Orion. William Wenthe has published two books of poems, “Not Till We Are Lost” and “Birds of Hoboken.” He has received poetry fellowships from the NEA, the Texas Commission on the Arts and two Pushcart Prizes. His poems have appeared in Poetry, The Paris Review and Shenandoah.

The Creative Writing Program is part of the Department of English in the College of Arts and Sciences at Texas Tech University.

Undergraduate students wishing to write fiction, nonfiction and/or poetry can major in English with a concentration in creative writing.

The faculty in creative writing are working writers with numerous publications and awards, and they are distinguished mentors and teachers who work closely with graduate students to help them meet their goals and aspirations.