Texas Tech researchers say U.S. farmers could see a drop in cotton prices over the next five years. 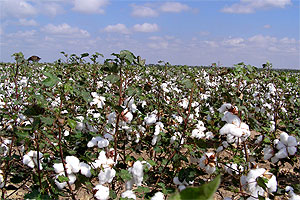 According to the study, Indian farmers could see a 13 percent increase in exports in the first year while U.S. farm prices drop by 5.17 percent.

A recent subsidy increase for India’s cotton farmers could drop world cotton prices by as much as 6 percent, according to a report from Texas Tech University’s Cotton Economics Research Institute (CERI).

U.S. farmers will see their prices slashed by an average 2.48 percent during the next five years, cutting into an industry that CERI Director Darren Hudson said pumps roughly $40 billion into the U.S. economy each year.

The country’s minimum support price represents the rate at which India’s government will purchase seed cotton from farmers.

This rate is usually based on expected production costs and not market prices, but in Sept. 2008, India announced an increase of up to nearly 50 percent for seed cotton depending on variety.

That equates to roughly $.72 per pound for most commonly produced cotton varieties. International prices range from $.55-$.58, the study said.

This discrepancy will cool production and trade flows both in the U.S. and globally.

U.S. farm prices will drop by 5.17 percent in 2009-2010 and producers should see cuts in yield, mill use and exports. Indian farmers should enjoy a 13 percent increase in exports in the first year as well as boosts in production and yield.

“The minimum support price program in India, along with other programs in China and Brazil, has contributed to downward pressure on U.S. and world prices, even though U.S. cotton acreage has declined by more than 40 percent since 2005,” Hudson said.

India is second behind China in world cotton production.