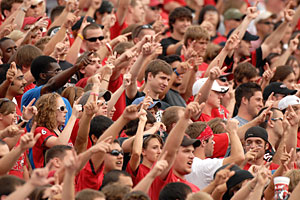 Texas Tech has moved up its single-game ticket sales date for the Texas A&M and Oklahoma games, allowing fans the opportunity to get an early jump on the popular conference matchups later in the season at Jones AT&T Stadium. The seats were originally available for purchase Oct. 4.

"Because of the popularity of a Texas Tech football ticket and the potential availability of new seating sections in the north corners of the stadium, we wanted to go ahead and offer our fans the opportunity to purchase tickets for our two premium games against Texas A&M and Oklahoma," Director of Athletics Gerald Myers said. "Tickets aren't available for the new section at this time, but remaining tickets in the existing seating can be purchased as of Sept. 16."

Individual tickets for each game are $95. Texas Tech also is offering a $190 Premium Mini-Plan, which includes tickets to the Texas A&M, OU and Kansas games. These packs are being offered in the current stadium seating. Once the new seating in the northwest and northeast corners is released, those will be available for the same price.

Tech previously sold $130 mini-packs that included either Texas A&M or OU game and another non-conference game. For those who purchased this package, the athletics department is offering an opportunity to purchase the additional premium game not included in their original mini-pack for $60. These fans can purchase as many seats as mini-packs purchased.

Tickets also are available for Texas Tech's other three home games against New Mexico, Kansas State and Kansas and can be purchased at www.texastech.com, any area Select-a-Seat outlet and at the Texas Tech Athletics Ticket Office located at the north end of Jones AT&T Stadium or call (888) GO-BIG-12 . Ticket office hours are 8:30 a.m.-5 p.m. weekdays.