One of Texas Tech University's Head Start Program founders and a former director were honored with Winnie the Pooh-inspired awards for achievements. 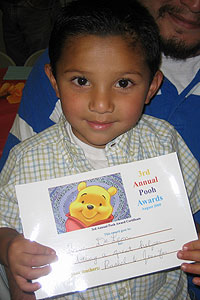 The Texas Tech University Early Head Start program honored one of its founders and a former director during its third-annual Pooh Awards Ceremony.

The ceremony is named after Winnie the Pooh, an international symbol of friendship and caring. Awards recognize community members or organizations active in the Early Head Start program.

More than 100 friends and family members of the program’s 56 children celebrated the children’s achievements during the ceremony.

Quincy White, one of the program’s founders, was recognized with the Grand Pooh Bah Award and La Nelle Ethridge, former director, received a Pooh Emeritus.

The children also were recognized with certificates of individualized appreciation.

White was executive director of the Lubbock Housing Authority when he helped found Parents as Teachers, a home-based parent education program for pregnant women and young mothers with low incomes that later expanded into Early Head Start.

Pooh Award organizers noted that while Quincy is now assistant city manager for the City of Lubbock and executive director of the North & East Lubbock Community Development Corporation, he continues to promote the Early Head Start program and advocate for the needs of families.

Ethridge worked as director for Early Head Start for nearly ten years before retiring in May, and continued providing guidance and advice after retirement, mentoring the program’s new director and advocating for the program when speaking in the community.

The Early Head Start program in the College of Human Sciences provides responsive services to families from culturally and socio-economically diverse backgrounds.