Restaurant Blogger Lindsay Feinberg, AKA The Lunch Belle, tastefully tells how the city has spiced up her life after Texas Tech.

Find out the latest in New York City dining at Lindsay Feinberg's Blog, "The Lunch Belle" at www.thelunchbelle.com 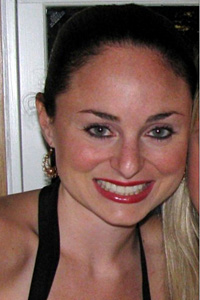 Alumna and restaurant blogger Lindsay Feinberg's reviews have been published in the New York Post and Page Six Magazine.

After giving up her furniture, car and most of her other luxuries, Lindsay Feinberg left Dallas with three suitcases and an uncontrollable craving for a taste of the Big Apple.

"I’ve gone once with a friend for margaritas and was lucky enough to talk to the manager,” said Feinberg, a self-proclaimed foodie and frequent blogger. “He invited me back for dinner, so I’m going there to try it out."

Feinberg has established a reputation among readers as a trusted voice in city dining. She maintains a popular blog under the psuedoname of "The Lunch Belle," where she rates restaurants, meals and dining experiences.

An El Paso native and graduate from Texas Tech University’s Restaurant, Hotel and Institutional Management (RHIM) program, Feinberg has the heart of a Texan, the soul of the city, and a giant-sized appetite for sharing her passion for food.

Foodie From the Start

By day, Feinberg spends her time researching, supporting and coordinating special projects for an alternative investments group at a large bank, but morning, day and night, she thinks and writes about food.

“I’ve been infatuated with food from the age of 4 or 5,” Feinberg said. “It’s like,” she said as she paused to find the exact emotion, “an obsession, actually. I think about food all day. You know, like how guys think about girls. I’m always thinking about food.”

It is because of her infatuation – and a crush – that Feinberg ventured from El Paso to Lubbock to study Restaurant Hotel and Institutional Management.

“I went to Texas Tech in 1998, first because of this boy I had a crush on, and also for their RHIM program,” Feinberg said. “I didn’t really know what I wanted to do but I always liked eating at restaurants and staying in hotels.”

The summer before her senior year, Feinberg took an internship with Marriott at The World Trade Center. She realized her second love was living in the city.

“I wanted to do my internship where food takes precedence over everything,” Feinberg said. “I came back and ended up taking a job in Dallas, but not a day went by that I wasn’t trying to get back to New York.”

In January 2007, Feinberg said she stumbled across an interactive Web site where people post queries and responses about restaurants in the city based on the type of food served, price and location.

From there, Feinberg said she found links to other people’s blogs and began following them regularly.

“It became an addiction, and I couldn’t pull away,” Feinberg said. “I was reading all these blogs that other people wrote and thought, ‘I could do this’. My colleagues and friends would randomly ask me where they should eat in the city. So instead of sending out tailored e-mails to people, I just started sending them to my blog.”

She realized that the more feedback she gave, the more questions came in, and Feinberg quickly developed a reputation as a discretionary voice in New York City’s food circles. 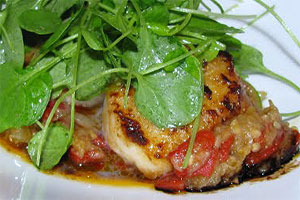 Scallops in shallow broth, marinated in chorizo oil and topped with eggplant caviar and watercress from Apiary Restaurant.

“I’d come home from my day job and spend hours updating my site and doing research, but it was time spent enjoyably – it’s just fun for me.”

While she enjoys writing about food, it doesn’t pay her bills. In June 2005, Feinberg was hired as a receptionist and administrative assistant at a hedge fund. She asked for more responsibility and permission to plan events and coordinate daily catered office lunches for the company, finally putting her education to work.

“I thought, ‘we don’t need to have gross banquet food for lunch. We live in NYC, the restaurant capital of the world,’ so everyday I would bring in a new restaurant," Feinberg said. "With all the places I was trying on a daily basis, it gave me a chance to write about them. I just put reviews on my Web site and it started catching on. I never thought it would go anywhere.”

However, a few months after she began blogging regularly, Feinberg received an e-mail from the New York Post asking her if she was interested in writing a brunch review for Page Six Magazine. She accepted the gig, and a few others, and eventually wrote a two-page collaboration spread for the printed version of the newspaper with Andrea Strong, a renowned food blogger and guest judge on “Top Chef.”

“This is when I feel that my ‘ah-hah’ moment happened,” Feinberg said, “where I really found my calling.”

Although Feinberg has yet to make restauranting and reviewing a full-time job, by blogging, freelancing and potentially writing a book, she is certainly laying the groundwork for the ultimate “work your way up the food chain” story ending.

For questions, comments or advice, email The Lunch Belle at The_lady_who_lunches@thelunchbelle.com