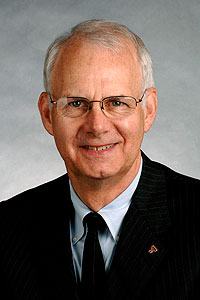 During his years with Texas Tech University System, Mike Ellicott has overseen more than $700 million in construction.

The man who oversaw much of the biggest building boom at Texas Tech in a quarter century is hanging up his hard hat.

Mike Ellicott, vice chancellor of facilities, planning and construction (FP&C), will retire in September after almost 10 years with the Texas Tech University System.

“It’s been a great ride. There are very few jobs where you get to build a modern academic campus and get great support from the board of regents and the administration,” said Ellicott.

“Despite the challenges, I feel a great sense of pride when I drive through the campus and see what FP&C created. We didn’t just build spaces, we created engaging places for the campus to live, learn and play. Our award-winning public art and landscape enhancement programs were a major part of that effort,” he said.

His favorite projects include the two buildings that now house TTUHSC’s Paul F. Foster School of Medicine in El Paso, the first new American medical school in 25 years and the only one of the U.S. - Mexico border. 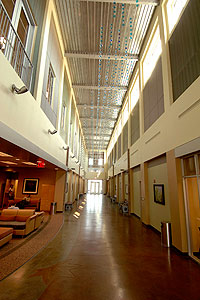 The 44,000 square foot Student Wellness Center located on the Texas Tech University campus is a one-stop wellness resource for students.

“Those two signature buildings, along with the students, faculty and staff, represent the future of Texas Tech along the border,” he said.

Ellicott also cites the Student Wellness Center on the Texas Tech campus as a favorite because it meant taking the vision of Michael Shonrock, Texas Tech’s senior vice president for student affairs and enrollment management, and turning it into reality.

“Michael knew what he wanted the building to be to best serve our students. It was a real thrill to take his vision and turn it into bricks and mortar and create a beautiful, functional building,” said Ellicott.

Rick Francis, of El Paso, has worked closely with Ellicott as both the former chairman of the Texas Tech University System Board of Regents and now the chairman of the board’s facilities committee. He worked closely with Ellicott on the El Paso project as well as other projects over the past six years. He pointed to the respect Ellicott has earned in Austin as a key factor in Texas Tech’s success.

“The Texas Higher Education Coordinating Board must approve our building projects and because they knew and respect Mike’s abilities our path has been a smooth one,” said Francis. “Mike has done a terrific job for Texas Tech. He has overseen so many major projects that have made our universities better able to provide exceptional facilities for our students. He’ll be missed.”

Mike Ellicott has left his mark on every campus in the Texas Tech system. Some projects are not yet complete, but he doesn’t have any – well not many – regrets about not seeing them through.

“At some point you just have to say enough,” he said. “I’m leaving everything that’s in progress in extremely capable hands. I’ve been blessed with an amazing staff. I will miss them.”