Texas Tech’s School of Law was the only law school in Texas with a top 35 Best Value ranking. 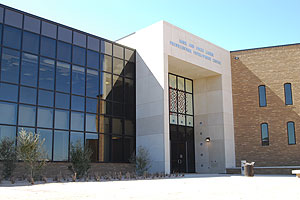 The national ranking is based on tuition cost, high bar-passage rate and high employment rate for graduates.

Texas Tech University’s School of Law is ranked 19th in the nation in a Best Value ranking of America’s nearly 200 law schools. National Jurist and preLaw magazines published the list in their September issues.

The Best Value ranking is based on three factors: the law school’s annual tuition costs; bar-passage rates above the state average; and employment rates for graduates exceeding 85 percent within nine months after graduation. Of Texas’ nine law schools, Texas Tech School of Law was the only one ranked in the top 35.

About Texas Tech’s School of Law, the National Jurist article says, “It’s relatively easy to find a law school with a strong academic program, great alumni and employer connections, or low tuition, but finding one that has all three can be a challenge.”

Walter Huffman, dean of the law school, said he was gratified but not surprised by Texas Tech’s ranking.

“I agree,” Huffman said, “and I am extremely pleased that our combination of relatively low tuition cost, high bar-passage rate, and high employment rate for our graduates has resulted – again – in recognition of Texas Tech law’s excellence in providing both opportunity and outstanding preparation for today's competitive job market.”

The magazines also comment on the attributes the top schools in their ranking have in common: small size, strong skills programs and an emphasis on fostering relationships within the law school community.

“I believe both current students and graduates would agree with me that those listed attributes are high among the qualities – though there are many others – that make Texas Tech the exceptional law school that it is,” Huffman said. “It is rewarding to learn that the excellence we already know and appreciate is recognized throughout the nation.”