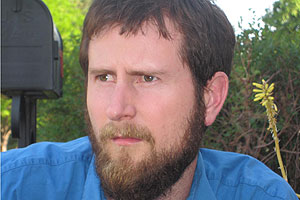 Thurman graduated from Texas Tech with a Bachelor of Fine Arts and credits his undergraduate experience for his interest in documentary filmmaking.

The King is alive, and living in Stinnett, Texas.

At least, that’s what Texas Tech alumnus Scott Thurman found and recorded in his documentary “Smokey,” which was screened during the June 18-28 Los Angeles Film Festival.

The short film takes an intimate look at Smokey Binion Jr. Water well worker by day, Binion impersonates Elvis Presley across the Panhandle of Texas at no charge to the viewing audience.

Throughout the movie, Thurman reveals that Binion is an optimistic man involved with his community as an employee of the city, and a tribute artist who is comfortable living and working in a small town while finding unusual ways to connect with all kinds of people.

From Photography to Documentaries

Even though he seems to be a natural, Thurman did not always want to be a documentary filmmaker.

He received a Texas Tech Bachelor of Fine Arts in photography with a concentration on digital photography. This undergraduate work started his interest in documentary filmmaking.

“Two classes in particular contributed the most to my interest in documentaries,” Thurman said, “A special problems course with Robin Germany on multi-media imaging, and a documentary photography class with Rick Dingus. Both were my photography professors.”

While his bachelor’s degree was a necessary step towards starting his master’s, Thurman said he received skills important to filmmaking.

“The Art Department environment at Texas Tech provided for important feedback from peers and faculty that helped me to communicate my ideas more effectively,” he said 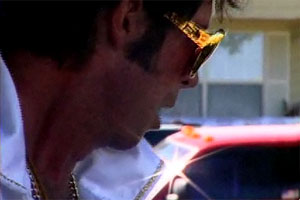 Thurman's documentary focuses on Smokey Binion Jr., an Elvis tribute artist who has developed a connection with the citizens of a small west Texas town.

The film is Thurman’s directorial debut; he made it during his first year in the Master of Fine Arts Documentary Filmmaking program at the University of North Texas, Denton.

Thurman decided to do his first documentary on Binion after hearing about the Elvis impersonator’s free performances from a friend.

The film can be viewed at the Reality Bites Web site by clicking on “1st place - Smokey.”

Watch the trailer for Thurman's documentary "Smokey" on YouTube.

The School of Art is part of the College of Visual and Performing Arts at Texas Tech University which also includes: