Museum of Texas Tech Executive Director Gary Edson leaves after 25 years of service to the university. 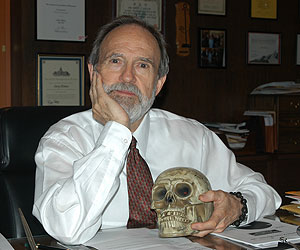 After 25 years, Long-time museum executive director Gary Edson will retire at the end of the fall semester.

Gary Edson announced this week that he will retire as executive director of the Museum of Texas Tech University. He also will leave his position as director of the Center for Advanced Study of Museum Science and Heritage Management.

Edson has been at Texas Tech for 25 years and director of the museum for 24 years. The museum has experienced major growth during his tenure. Of particular importance was the addition of the Diamond M Collection and Gallery, renovation of the Devitt Wing and opening of the Explorium, Davies Southwest Indian Art Gallery, the Changing World Gallery, African Art Gallery, Pre-Columbian Art Gallery and Taos-Southwest Gallery.

Three major additions to the museum during Edson’s tenure were the acquisition of the Lubbock Lake Landmark, the construction of the Helen DeVitt Jones Auditorium and Sculpture Court and the new addition to the Natural Science Research Laboratory.

“During Gary’s 24 years as executive director, the museum has grown to international prominence,” said James Brink, associate vice provost of Heritage Consortium for the Natural and Historic Southwest. “Thanks to Gary’s direction, the museum science and heritage management degree programs are two of our strongest post-graduate academic areas.”

Edson also held the position of professor of museum science and in that role was actively involved with lecturing at national and international workshops and symposia. He was an active member of the International Council of Museums and was elected to the Executive Council of that organization for two terms. He was recognized worldwide for his work with museum ethics and wrote a book that is generally viewed as a primary information resource on that topic.

Edson will leave the museum and Texas Tech at the end of the fall semester. He plans to continue his work with the international museum community and to write on topics related to museology. An international search is planned for a new executive director.