Renee Brosch honored by the Texas Supreme Court for her pro bono contributions to the underserved community. 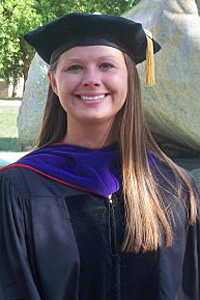 Renee Brosch of Granger graduated from the Texas Tech School of Law in May, 2009.

A Texas Tech University School of Law graduate recently received a state award for her commitment to the provision of legal services to the poor.

The Texas Supreme Court’s Access to Justice Commission Law Student Pro Bono Award has been given to Renee Brosch, a May law graduate from Granger. The award recognizes a law student whose pro bono work has made a significant impact on the community and reflects a passion for advocating on behalf of underserved populations.

In 2008, Texas Tech’s School of Law received the inaugural Law School Commitment to Service Award, presented by the same organization.

“For us to be the only law school selected for the inaugural public service award last year, and then to have Ms. Brosch recognized this year from among all the law students in Texas is really a quite special – and quite significant – combined achievement,” Huffman said. “The awards emphasize Texas Tech’s leadership in public interest law and pro bono service to those less fortunate.”

Brosch will be honored at the New Lawyer Induction Ceremony in Austin on Nov. 16, and be presented with a $2,000 stipend in recognition of her efforts.