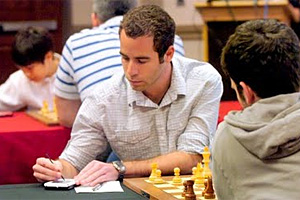 Gergely Antal is a senior economics major from Hungary. He is one of about 2,800 International Masters in the world.

The Knight Raiders chess team member beat the defending national champion and three players from the University of Texas at Dallas – considered one of the nation’s top collegiate chess programs – to claim Texas Tech’s first national title in chess.

Antal, along with fellow Knight Raiders Stephanie Ballom and Josh Osbourn competed in the U.S. Open which concluded Aug. 9.. Antal tied for 7th place, a half-point short of a second Texas Tech national title, after playing to a draw against Grandmaster Julio Becerra.