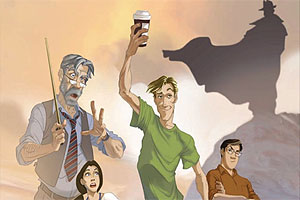 The purpose of the graphic novel textbook is to provide a better teaching tool by making the material interesting and entertaining for students.

Students used to get detention for reading comic books in class. Now a similar format is being used as a way to engage them in learning.

Jeremy Short, the Jerry S. Rawls Professor of Management in the Rawls College of Business, has published the first-ever graphic novel textbook on management, which is just out this summer. The first chapter of “Atlas Black: Managing to Succeed” can be viewed online.

Short co-authored the book with Talya Bauer, the Cameron Professor of Management at Portland State University, and Dave Ketchen, the Lowder Eminent Scholar in Entrepreneurship at Auburn University. Both Bauer and Ketchen have previous experience co-authoring traditional textbooks on management topics and all three co-authors serve as editor or associate editor at academic journals such as the Academy of Management Journal and the Journal of Management.

Making a Connection through Comics

Short thinks the book, which took about four years to develop, will appeal to college students. He said the primary goal is to provide a better teaching tool by making the material interesting and entertaining for students.

“I think that many textbooks in strategic management tend to offer a number of disconnected examples using different companies that students might not be familiar with,” said Short. “This can create information overload and I believe it leads to retention problems. In contrast, the graphic novel uses a fixed set of characters that apply the material to their story.”

“Atlas Black: Managing to Succeed” is about two college seniors starting their own restaurant called the No Cover Café. The storyline helps keep the information accessible and interesting. Short said they were able to inject a lot of humor into Atlas Black, which breaks up the material and helps students stay focused and engaged.

The reaction to Short’s work has already been very positive, and two more Atlas Black books are under contract. 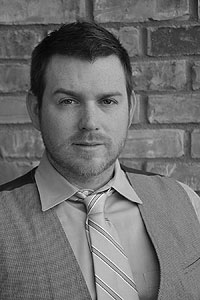 Jeremy Short is a professor of management in the Rawls College of Business. View his expert profile in our online Experts Guide.

“Some colleagues initially find the idea of a comic as an educational tool to be strange,” Short said. “But after I tell them that the Federal Reserve has been putting out comics on topics such as monetary policy for years, the 9/11 commission report was in graphic novel format, that the graphic novel “Maus” won the Pulitzer Prize, and that many movies were originally graphic novels, they are generally won over and quickly embrace the idea once they see the finished work.”

That Atlas Black came to be at all was somewhat a case of Short being in the right place at the right time.

“I had a student in an MBA class who had worked with Len Simon, the illustrator for the ‘Atlas Black: Managing to Succeed’ book, who has worked on movies such as Anastasia, Adam Sandler’s Eight Crazy Nights, Fat Albert and Curious George,” Short said.

“I mentioned to her that someone should do a graphic novel version of a management textbook and the she suggested that if I was serious she would put me in contact with Len. So it was definitely a case of following up on that opportunity.”

After that introduction, colleague and co-author Bauer told him about an upstart publishing company called Flat World Knowledge whose goal was to specialize in low cost textbooks and they were very open to innovative ideas.

“In addition to really liking their innovative format and their desire to make textbooks affordable again, they allowed us the creative license that I don’t believe would have been possible with many of the ‘old school’ publishers,” Short said. “Flat World Knowledge is making a big push to make textbooks affordable with their open-source approach. The printed version of Atlas Black, for example, sells for $14.99.”

Both the case study and the textbook concepts were supported by Short’s peer-reviewed article, published in Business Communication Quarterly. The Graphic Novel: A “Cool” Format for Communicating to Generation Y, explores the subject of using graphic novels for teaching business.