Brilliancy: Across the Board

The new outdoor Chess Park on the Texas Tech campus is open for play. 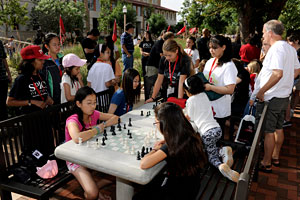 The new chess park includes six tables with benches and one handicap accessible table. The park is situated between the Student Union Building and the University Library.

The Texas Tech University Chess Park is now open for chess lovers to play the game outdoors on Central Park-inspired chess tables between the Student Union Building and the University Library. The chess park is one of the first at a major university in the U.S.

However, Susan Polgar said, the park is more than just a place to play chess.

“When I agreed to come to Texas Tech to start the Susan Polgar Institute for Chess Excellence (SPICE) back in the summer of 2007, some of my goals included promoting the importance of chess in education, chess research and chess outreach, especially within our local community,” said the SPICE director.

Polgar said the chess park is helping fulfill these goals.

The park was funded, in part, by an anonymous donation of $320,000, which is also being used for scholarships to attract chess players to the university.

“Sandia's financial contribution comprised roughly 25 percent of the total project cost,” said Jason Hodges, the Texas Tech System landscape architect, who oversaw the project. “Plans for the chess park would have been shelved without Sandia's generosity.”

Texas Tech is already known in the chess world by hosting the Susan Polgar National Invitational for Girls and the SPICE cup, and Polgar thinks the chess park will only add to the university’s chess credibility.

“This is one way to show the world that Texas Tech and Lubbock care about improving the quality of education for young people, by using chess as a critical, effective, but inexpensive tool to accomplish that mission,” Polgar said.

“Now everyone can enjoy this beautiful chess park at a magnificent location on campus. This is a historic moment for this wonderful university.”