Couple's wedding to be planned completely by Today show viewers. 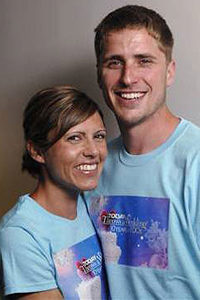 Leigh Daniel and Nick Cordes won a Today Show dream wedding after competing with three other couples for the prize.

Two-time Texas Tech national track champion Leigh Daniel and her fiancé, Nick Cordes, will get married July 15 in a live wedding on the Today show, thanks to the help of Red Raider Nation.

The cross-country couple received more than 66,000 votes from viewers over the course of the three-week contest to beat three other hopeful couples.

Viewers will now plan their wedding by texting and voting on TODAYShow.com for the couple’s rings, the wedding gown, the attendants’ attire and the honeymoon.

Daniel and Cordes first met in the same Olympic Development Program, where training was so intense that dating among athletes was strictly prohibited. They were kicked out of the program and now both work with the cross country program at Ashland University – Leigh is the women’s coach and Cordes is the men’s coach.