Author Frederick Nolan will sign copies of his new book, 'Tascosa: Its Life and Gaudy Times,' July 20 in Amarillo. 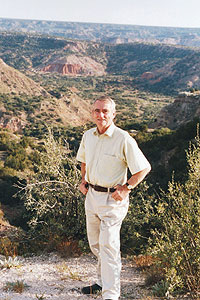 Nolan is considered Britain's foremost authority on the Wild West and will discuss his new book with the public July 20.

The Texas ghost town of Tascosa is the topic of discussion at a book signing by author Frederick Nolan from 6-8 p.m. July 20 at Hastings Entertainment, 2020 S. Georgia Ave. in Amarillo.

Nolan will talk about and sign copies of his new book “Tascosa: Its Life and Gaudy Times,” published by Texas Tech University Press.

A lot of bad men made fortunes and a lot of good men lost them as Tascosa went from boom to bust, from frontier Babylon to forgotten ghost town, in just a few decades. Bypassed by the railroad, the community dried up. Today Tascosa is a ghost town; its name has all but disappeared from Texas maps. In his book Nolan digs up the history of one of the most violent outlaw towns of the Old West.

Tascosa was called the cowboy capital of the Texas Panhandle and the hardest place on the frontier. Nolan tells the stories of Pat Garrett’s Home Rangers, the 1883 cowboy strike and the undeclared war that ensued between the corporation ranchers such as Charlie Goodnight and the fraternity of rustlers manipulated by Tascosa town boss Jesse Jenkins.

As well as being the center of ranching activity in the Panhandle, Tascosa became the last best hiding place in Texas for killers on the run, horse thieves, tinhorn gamblers, hair-trigger shootists or anyone else with a past he wanted to get away from. Billy the Kid, “Poker Tom” Emory, Bill Gatlin, Jim Kenedy and Louis “The Animal” Bousman were just a few of the outlaws and desperadoes who vied for dominance with lawmen in an ongoing war of attrition that made sudden death a routine occurrence.

Nolan is the author of “The West of Billy the Kid,” “The Wild West: History, Myth and the Making of America,” and many other works of fiction and non-fiction. He is considered Britain’s foremost authority on Billy the Kid and the Wild West.

For more information or to contact Nolan, visit his Web site.

Texas Tech University Press publishes a variety of titles each year ranging from nonfiction titles in natural history and the natural sciences to works in costume and textile history and all aspects of the Great Plains and the American west – especially biography, history, memoir and travel. The press also publishes fiction, young adult and children’s titles, a mystery series and an annual poetry selection.

For more information on any of the award-winning books or the many others published by the press or review copies of these books, contact Barbara Brannon, marketing manager, Texas Tech University Press,
(806) 742-2982.