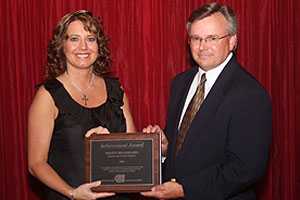 Mindy Brashears, an associate professor of food microbiology and safety and director of the International Center for Food Industry Excellence, was one of three recipients of the Distinguished Achievement Award.

Brashears developed and launched a food safety course that is available in the classroom, but also–thanks to a USDA integrated grant–in an online format, and in Spanish. The course is available to meat industry professionals, university students and faculty in HACCP and foods safety.

The Spanish-language version has led to collaborative training within the Mexican meat industry.

Kerth earned a master’s and doctoral degree in animal science from Texas Tech. He founded the Auburn Meat Science Association, developed the muscle foods degree option in animal science for undergraduates and played an important role in the design and construction of the Lambert/Powell Meats Lab, the William R. Jones Demonstration Kitchen, and the Dale L. Huffman Conference Room.

The Distinguished Achievement Award recognizes and fosters the development of young AMSA members who have demonstrated significant scientific skills in muscle foods research and technology that contribute to the animal products industry and the AMSA. The award is sponsored by Cryovac Sealed Air Corporation.

The Distinguished Teaching Award recognizes excellence in the teaching of undergraduate and graduate meat science courses and the impact on the lives of those students in a highly positive manner. The award is sponsored by Oscar Mayer, a Division of Kraft Foods.

The AMSA professional society was incorporated in 1964. It provides the forum for all interests in meat–commercial, academic, government, and consumer–to come together in a reasoned, scientifically based atmosphere to address the needs of the processing and marketing segments of industry, the consuming public, its own members and others in the biological and nutritional sciences.