Chuck Cannon is an assistant professor of evolutionary plant biology in the Department of Biology in the College of Arts and Sciences. 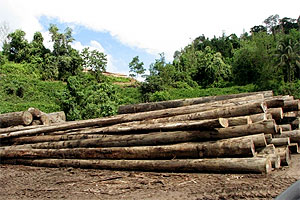 Chuck Cannon, lead investigator for the study, said his team researched how changes in climate and sea levels affected the Sundaland-area rainforest’s evolutionary history in the last million years. Many important animals, such as the orangutan, are already at unusually low population sizes because of natural changes from the last Ice Age.

Since the current distribution of rainforests scattered on the major islands of Borneo, Sumatra, Java and the Malaysian peninsula are in retreat – working in reverse of how forests in higher latitudes have grown back where glaciers once covered the ground – future climate change and deforestation may cause worse damage to an area already in survival mode.

“Understanding the historical spatial dynamics of forest distribution plays a crucial role in the ability to predict community response to future change,” Cannon said. “This also has major conservation implications, as the forests are being cut down in Southeast Asia. They already went through a fairly recent and major reduction and fragmentation event, at the end of the last Ice Age.”

The results were published June 19 in the online early edition of the Proceedings of the National Academy of Sciences.

The Price of Deforestation

Much has been written about the decline and degradation of Southeast Asia’s rainforests, Cannon said. Converting natural forests to plantations has continued at a high rate for many years, which fragments the rainforest and leaves fractured habitats for endangered species such as orangutans, gibbons, sun bears and clouded leopards.

Cannon’s new model highlights the fact that rainforest conversion by humans is occurring only a few thousand years after a major natural reduction and fragmentation of forest area occurred when glaciers melted and sea levels rose.

All of these endangered species were at historical lows in their population and already highly vulnerable to population extinction. Now, Cannon said activity could be accelerating that extinction.

During the last Ice Age, when much of the water was trapped in glaciers in higher latitudes, this area, known as Sundaland, had rainforests that flourished and expanded into an Amazon-like river basin.

When the glaciers melted, sea levels rose and flooded this river basin, marooning forests on high grounds, isolating plants and animals and creating a refugial stage for the rainforest ecosystem that clings to survival on the land that is left.

While scientists understand the expansion of populations out of the refugial stage, they know almost nothing about how areas in the refugial stage are formed, he said. This is a critical question confronting ecologists and biogeographers in Southeast Asia, and Cannon’s model provides a tool for exploring these dynamics.

“Using detailed historical models of how the rainforests of Southeast Asia worked in the past will greatly enhance our understanding of future response to climate change and development and will provide insight into how to best mitigate the ongoing conversion and degradation of these mega-diverse forests,” he said.

Photos of logging in Danum Valley, Borneo, one of the islands of Sundaland, courtesy robstephaustralia.