Texas Tech researcher David Haukos warns that loss of playas could have a lasting effect on wildlife, plants and people. 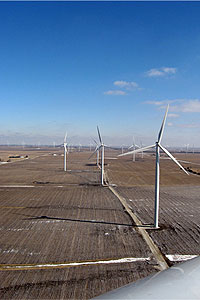 According to the State Energy Conservation Office, Texas is currently the U.S.’ top wind producer and home to three of the five largest wind farms in the nation.

Despite the attraction of wind as a nearly pollution-free power source, a Texas Tech University wildlife ecologist cautions that a tsunami of modern wind turbines dotting the South Plains of Texas could have as yet unknown ecological consequences on critical wetlands known as playas.

And there are plenty of playas on the Texas High Plains and in Eastern New Mexico – approximately 22,000, in fact. Indeed, it’s the largest concentration in the world. Playas act as natural water storage sites, providing irrigation water and seasonally recharging the Ogallala, the nation’s largest aquifer.

“We don’t have any information specific to this region about the effect of wind farm construction on wildlife, and that’s a problem because the Panhandle and South Plains of Texas are going to be major players in the wind industry,” said David Haukos, an adjunct wildlife ecology professor in Texas Tech’s Department of Natural Resources Management.

Texas, once the oil capital of North America, is rapidly turning into the capital of wind power. After breakneck growth the last three years, the state has reached the point that more than 3 percent of its electricity, enough to supply power to one million homes, comes from wind turbines.

“As the technology related to wind farms improves, we’re going to see bigger and bigger wind turbines,” Haukos said. “When you start putting these large structures on the landscape, we really don’t know how the animals and wildlife are going to respond.”

Other wildlife researchers have found that in European wetland settings, birds have tended to avoid wind turbines. And avoidance of playas is not the impact anyone wants since these miniature wetlands are directly related to the success of wildlife survival and associated conservation efforts.

“Playas are much like an ecological oasis for wildlife,” said Haukos, who serves as a regional migratory bird specialist for U.S. Fish and Wildlife Service.

Estimates suggest that some two million waterfowl winter on Texas playas, making it the second largest wintering site in interior North America for ducks and geese. Furthermore, wildlife supported by playa habitats has spawned a thriving lease-hunting industry in the region, while simultaneously providing a popular draw for money-spending birdwatchers and nature photographers, as well. 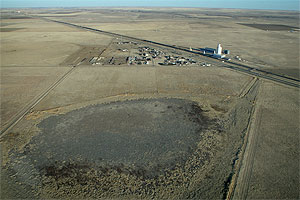 The Texas High Plains and Eastern New Mexico has the largest concentration of playas in the world – approximately 22,000. Click to Enlarge.

On the Southern High Plains specifically, playas only occupy about 2 percent of the land area. They’re normally small; 90 percent of them are less than 30 acres in size. But these small, scattered wetlands form a system that supports most of the life in the area whether it’s plants, animals or people.

“Playas are keystone ecosystems,” Haukos said. “They’re the eco-systems that all the other eco-systems depend upon in this region. Loss of the playas would have a great effect on wildlife, plants and probably people in this part of the world.”

Today, there is no regulation that prohibits constructing a wind farm next to a playa on private land. There are some voluntary guidelines from Texas Parks and Wildlife and U.S. Fish and Wildlife for wind companies to consider, but none are mandatory.

Separately, several Texas Tech studies are underway examining wind farm construction, including their effect on bats and lesser prairie chickens. In addition, wind farm companies have been coming to the Lubbock campus looking for setback guideline recommendations, as well as bird surveys and migratory patterns.