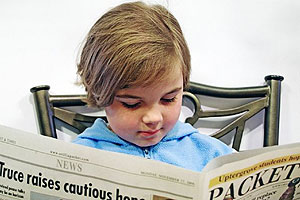 Texas Tech Librarian Rob Weiner showed that Spider-Man and similar childhood figures establish a real existence in the minds of children and adults.

Yes, Mary Jane, there is a Spider-Man.

At least, that’s what pop-culture guru and associate humanities librarian for Texas Tech University Libraries Rob Weiner set out to prove in an article published in the International Journal of Comic Art.

A note to comic buffs: don’t get too wrapped up searching the skyline for web-slinging do-gooders just yet.

However, there’s good news for anyone who’s ever picked up a Spidey comic or just worn one of his T-shirts: thanks to you, Spider-Man has found life outside of comic-book pages.

In much the same way that editor Francis Pharcellus Church proved the existence of Santa Claus in his famous 1897 New York Sun editorial, Weiner contends that Spider-Man and his costumed peers have entered mankind’s collective consciousness, filling a shared need for heroes.

“When I started reading graphic novels, I was struck by the fact that stories about Spider-Man or Batman and Superman could have as many plot twists and turns as any story by Shakespeare, Stephen King or Leo Tolstoy,” he said. “I was struck by how good some of the writing was for these so-called “kiddie” books, and that somehow these archetypical characters like Spider-Man were replacing Odysseus and Zeus as part of modern mythology.”

Spider-Man boasts a resume that would make many celebrities salivate: blockbuster movies, a TV series, magazine appearances, graphic novels, video games and action figures. He’s spawned knock-offs, spin-offs and imitators. Fans from across the world could pick his mug out of a lineup.

Some people even don his costume while doing something as humble as feeding the homeless.

“While some of this (affectation) is categorically tongue-in-cheek and they don’t have ‘super powers,’ these actual-world costumed figures are trying to do good for their fellow citizens, which shows just how pervasive fictional realities can be,” Weiner said.

A copy of Weiner’s article is available as a pdf upon request, or a copy of the journal can be purchased online here.

The University Libraries Include: