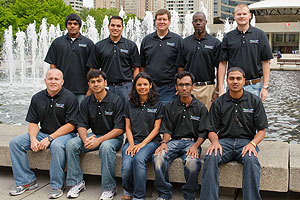 A group of Texas Tech engineering students are among the 17 North American universities competing in EcoCAR, a three-year challenge to re-engineer a 2009 Saturn VUE with improved fuel economy and greenhouse gas emissions, while maintaining the vehicle’s safety features and consumer appeal.

The first year of the EcoCAR challenge, which emphasized the use of math-based design tools and simulation techniques in establishing a successful vehicle foundation, culminated in Toronto in June, and evaluated the teams’ progress through various presentations. Texas Tech University EcoCAR Team won the Best Education Outreach Award.

The competition finals brought together more than 350 students, faculty, team mentors, competition organizers and sponsors for a dozen technical and PR events. The competition resulted in new ideas, and also served as a launching pad for young minds to contribute future innovations in green vehicle technologies.

In August, each team will receive a 2009 GM Saturn VUE vehicle which will be re-engineered to fuel a green future. In years two and three, teams will build the vehicle and continue to refine, test and improve vehicle operation.

Timothy Maxwell, a mechanical engineering professor and member of Texas Tech’s EcoCAR team, said their car is unique and is an improvement on the stock VUE.

“The Texas Tech VUE has been designed to provide approximately 40 miles per gallon of gasoline equivalent and to exceed performance of the stock Saturn VUE in most other areas,” Maxwell said.

Sponsors of EcoCAR include the U.S. Department of Energy, the Canadian government and General Motors Corp.