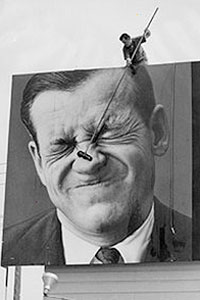 "The Big Itch" will be one of 50 news photos by the Watson family on display at the Museum of Texas Tech University.

The museum is located at 3301 Fourth Street, where free parking is available in the north and west parking lots.

In less than a century, Los Angeles grew from a coastal enclave to one of the world’s most influential cities. News photographers in the Watson family recorded it all – big disasters, everyday triumphs, world leaders, petty criminals, sports legends and infamous trials. Across four generations, a Watson photographer, or two, has been on hand at most of the significant events in Southern California, and on occasion throughout the world.

Spanning the entire 20th century, the exhibition presents more than a historical chronology. It also illustrates how advances in photo-technology changed the texture of news photography. The Watson family’s tradition of technical innovations dating to the early 1910s in both motion picture and still photography are highlighted throughout the exhibition.

Selections from the Family Archive also have been exhibited at Los Angeles County Museum of Science and Industry (1972), Los Angeles County Public Library, Getty Gallery (2003) and The Forrest Lawn Los Angeles Museum (2007). In 1999, the Watson Family received a star on Hollywood’s Walk of Fame honoring their contributions to the film industry.

The Museum at Texas Tech University was established in 1929.

For more information or phone interviews about the Watson Family Photographers exhibition, contact Jeffrey Landau at (310) 397-3098.

For more information about the Museum of Texas Tech, contact the MoTTU Education Office at (806) 742-2432.