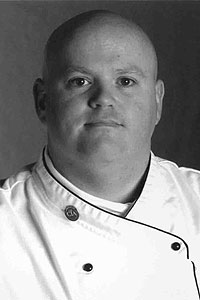 Rocky Rockwell graduated as valedictorian from the Culinary Institute of America 1999.

In his nine years with the university, Rocky Rockwell has nurtured Texas Tech’s Hospitality Services from “dorm food” into an inviting array of culinary choices. As the Certified Executive Chef of Hospitality Services, Rockwell and his staff have broadened dining choices, updated facilities and created a welcoming image on campus.

However, it is his work in the community – not the kitchen – that prompted Rockwell’s colleagues at the South Plains Chef Association to name him Chef of the Year. Rockwell and his staff are committed to making Texas Tech, the Lubbock community and the environment a healthful place to live and eat.

“We do a lot of community work with events for the kidney association, the heart association and a lot of other groups,” Rockwell said. “There are about 20 events a year for which we prepare food or supply labor. As a non profit organization the chef’s association uses what we make from the events to fund member certifications, student scholarships and member trips to state and national conventions. Our main focus is not to compete with local businesses but to work in concert with the charities to provide a great product at a severely discounted rate to help both organizations.”

Each year, the South Plains Chef Association and six other regional associations in Texas choose one chef from the region to accept the honor based on community involvement. The winners of the regional Chef of the Year award will meet in San Antonio in August where participants will choose a Texas Chef of the Year.

Rockwell has more plans to improve culinary practices on campus. With a background in the fast-paced, hectic kitchens of restaurants in New York City and Florida, Rockwell hopes to transfer to the university some practices he picked up in the city.

“My goal is for us to move more into sustainability, recycling and eventually farm-to-table type of things,” Rockwell said. “And we’ve got a good start. I would really like total recycling, from food scraps to turning the grease we use in the fryer vats into biodiesel, which we’re already doing. That’s the direction I’d like to be headed.”

Rockwell said the university is taking small steps toward a larger goal of total sustainability by adopting recycling practices with food products and preparation materials.

Rockwell, began his culinary career at the Dallas Country Club. In 1999 he graduated first in his class from the Culinary Institute of America in Hyde Park, N.Y. From there, Rockwell studied under Jonathon Zearfoss in the American Bounty Restaurant Kitchen on the Culinary Institute of America campus in New York City. In West Palm Beach, Fla., Rockwell cooked at “The Restaurant” in the Four Seasons Hotel before joining Hospitality Services as the executive chef in 2000.

Rockwell is a member of the South Plains Chapter of the Texas Chef Association and the American Culinary Federation and placed third nationally for college and university chefs in 2002 at the NACUFS national convention.

Hospitality Services promotes each student’s learning experience by nourishing the minds of tomorrow and serving a savory experience.