Duo Recognized for Support of Women in Science

Martha Hise and Todd Anderson honored by the West Texas Association for Women in Science for outstanding efforts. 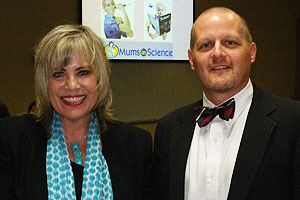 Martha Hise, director of IDEAL, was awarded Outstanding Woman Leader in Science and Todd Anderson, professor of environmental and analytical chemistry was named the Champion of Women in Science.

The West Texas Association for Women in Science recognized a Texas Tech University faculty member and a staff member for their outstanding support of women in science at the association’s 2009 award ceremony held May 29.

Martha Hise, director of the Institute for the Development and Enrichment of Advanced Learners (IDEAL), was honored by the organization as the Outstanding Woman Leader in Science for 2009. Todd Anderson, a professor in the Department of Environmental Toxicology and The Institute of Environmental and Human Health (TIEHH) earned the Champion of Women in Science award.

The West Texas Association for Women in Science created the awards to recognize individuals who support and promote women in science. Individuals are nominated by association members and honorees are selected by an awards committee composed of Texas Tech students, staff and faculty.

One of Hise’s projects through IDEAL is the Science: It’s a Girl Thing summer camp for girls entering grades five through 11. The program addresses the shortage and need for women scientists and introduces under-served girls to a university experience.

Anderson has received the Chancellor’s Distinguished Research Award and the President’s Excellence in Teaching Award. Also he has been honored with fellowships from the American Association for the Advancement of Science and the U.S. Department of Energy.

The association was founded in 2008 with the mission to actively support and encourage women of all ages and career choices, and have adopted the vision and mission of the National Association of Women in Science.