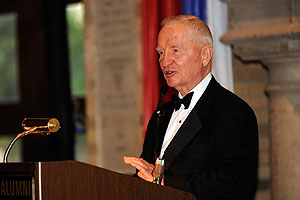 H. Ross Perot Sr. addresses the audience at the Frazier Alumni Pavillion during the 20th anniversary celebration of the Vietnam Center.

The burnt-red sunlight of a dying West Texas day slanted through the windows of the Frazier Alumni Pavilion as H. Ross Perot Sr. stepped to the podium to address a black-tie audience at the Texas Tech University Vietnam Center and Archive’s 20th Anniversary Ball.

Beneath red, white and blue banners draped from the rafters, the billionaire and two-time presidential candidate extolled the virtues of honor and sacrifice for a crowd that included U.S. legislators, Texas representatives, city councilmen and university administrators.

“Words are plentiful, but actions are precious,” he said.

Or, put a bit less eloquently: it’s not what you say; it’s what you do.

As Perot pointed out, the Vietnam Center has reached its current stature largely because of the actions of those who, for the past two decades, have nurtured and built a simple collection of letters into one of the world’s preeminent repositories of information on the Vietnam War era.

Jim Reckner, founder and recently retired director of the center, began the archive with a single bundle of letters written from a GI to his mother. Today, the center has more than 20 million documents chronicling the exploits of soldiers and generals, Vietcong and war protestors – second only to the holdings of the National Archive.

Along the way, the center positioned itself as a diplomatic emissary, advancing reconciliations between the former enemy nations through academic and even political agreements that have led to student exchanges and even sharing of information with Vietnam’s national archivist.

Perot illustrated the center’s importance by detailing the experiences of some of the veterans in attendance, men who faced physical torture and the passive brutality of seclusion through hard years of being shuffled between prison camps.

Men like U.S. Rep. Sam Johnson, who suffered a broken arm and back after being shot down during a combat mission and spent seven years as a prisoner of war – including nearly three and a half years in solitary confinement.

Johnson developed a special code to speak with other prisoners by tapping on the prison walls and committed 374 names to memory so he would be able to report their location if he got home before they did.

Perot told similar stories about GIs showing courage in the face of torment and horrific conditions, putting their country ahead of their own well-being.

These are exactly the type of stories contained on the archive’s shelves, he reminded audience members.

In other words, the center’s archivists have spent 20 years preserving the words that describe the deeds of those who fought and died in the conflict, providing details and insights for veterans and scholars both through the center and the Virtual Vietnam Archive.

“We have worked diligently to honor our nation’s military veterans and other wartime participants by preserving and providing access to their history and stories,” said Steve Maxner, director of the Vietnam Center and Archive. “Vietnam Center collections are used by researchers and scholars around the world as they teach and write about the Vietnam War.”

Perot began Electronic Data Systems (EDS) in 1962 and built it into one of the world’s largest technology services firms before selling it for $2.5 billion to General Motors in 1984. He founded a new company, Perot Systems Corporation, in 1988.

In 1969, Perot spearheaded a campaign to end the brutality shown to U.S. POWs. Ten years later, when two EDS employees were taken hostage in Iran, Perot organized and directed a successful rescue mission.

He ran for president as an independent candidate in 1992, earning 19 percent of the vote, and again in 1996 on the Reform Party ticket.

He is the author of seven books and has received awards and honors including The Winston Churchill Award, the Raoul Wallenberg Award, the Jefferson Award for Public Service, the Patrick Henry Award and the National Business Hall of Fame Award.

A Farewell to Archives