Researchers from Texas Tech's Atmospheric Science group will participate in a field project to uncover the secrets of tornadoes. 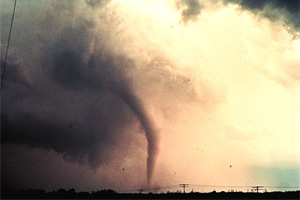 Texas Tech will be sending a team of 19 faculty and students to participate in the project, as well as two observing platforms to collect data on the tornadoes.

The project, Verification of Rotation in Tornadoes Experiment 2 (VORTEX2 or V2) will occur from May 10 through June 13 in the central United States. The collaboration is the largest and most ambitious attempt to study tornadoes in history and will involve nearly 100 scientists and 40 research vehicles, including 10 mobile radars.

Christopher Weiss, assistant professor of atmospheric science at Texas Tech, will lead a team of 18 faculty and students into the field for the project.  The assignment will last for two spring seasons.

Texas Tech will bring two observing platforms to the VORTEX2 field phase. The first platform, named Stick-Net, represents an array of 24 durable tripoded observation stations, individually deployed in the path of tornado-producing storms to measure the temperature, pressure, humidity and wind. The second platform, one of the newly-constructed TTUKa mobile Doppler radars, will make remote measurements of the horizontal and vertical structure of tornado cyclones.

“When the project begins, we will travel wherever conditions are most favorable for tornadoes, anywhere from Texas to South Dakota,” Weiss said. “We will generally have a feel for regions of interest the day before the event, but will not have a specific target until the morning of the potential event.”

Scientists will sample the environment of supercell thunderstorms – violent thunderstorms capable of producing damaging winds, large hail and tornadoes – that form over more than 900 miles of the central Great Plains. Areas of focus include southern South Dakota, western Iowa, eastern Colorado, Nebraska, Kansas, the Texas panhandle and western Oklahoma. The V2 Operations Center will be at the National Weather Center in Norman, Okla.

V2 is a $10.5 million program funded by NOAA and the National Science Foundation, 10 universities and three non-profit organizations.

The original VORTEX program, operated in the central Great Plains during 1994 and 1995, documented the entire life cycle of a tornado for the first time in history. Recent improvements in National Weather Service severe weather warning statistics may be partly due to the application of VORTEX findings. V2 will build on the progress made during VORTEX and further improve tornado warnings and short-term severe weather forecasts.

Preliminary results from V2 are scheduled for presentation at Penn State University during fall 2009. At that time, organizers will begin planning details of the second phase of V2 scheduled for May 1 - June 15, 2010.

For a complete list of participating scientists, and to learn more about the experiment, visit the V2 Web site and the official project Web site. [gallery=33]

The Wind Science and Engineering (WISE) Research Center at Texas Tech University was established in 1970 and is focused on research, education and information outreach.

The Center offers interdisciplinary education in wind science engineering as well as develops information on windstorm disaster relief and other wind-related subjects for professionals and the public.

Texas Tech's Atmospheric Science Group is part of the Geosciences Deaprtment in the College of Arts and Sciences.

What It Feels Like ... To Shoot A 2x4 Through A Brick Wall