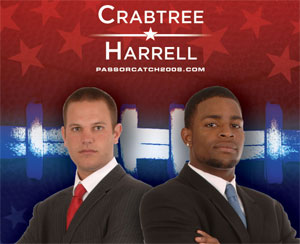 "Pass or Catch 2008" played off of the 2008 presidential campaign and centered around the Web site www.passorcatch2008.com.

The campaign, “Pass or Catch 2008” played off of the year’s heated presidential campaign. The center of the campaign was a Web site www.passorcatch2008.com, which had more than 73,000 visitors from 91 countries.

“The purpose in crafting something like this is to create awareness, and I think we did that,” said Chris Cook, associate director of athletics/media relations. “The biggest factors in its success were Graham and Michael having the seasons they did and the program completing one of the most memorable seasons in school history.”

The campaign, aimed at Heisman voters across the country, focused on the Red Raiders’ two stars: quarterback Graham Harrell and receiver Michael Crabtree. Harrell finished fourth in the Heisman voting and Crabtree fifth. The Web site featured each player’s statistics and “vote for me” style videos. It was supported by a mailing of “campaign” buttons and other paraphernalia, including note pads, campaign signs and bumper stickers.

“The most impressive thing about it was watching the development of what began as a simple idea and it taking off overnight,” Cook said. “There a several people that hit the ground running to create what it eventually became, and they are to be commended.”

The team that created the Web site was led by Blayne Beal, associate media relations director. Kirk Heard wrote and directed the video spots with editing and videography support from Andrew Gamel, both from the Sports Broadcasting office. Katie Schneider, in the athletics marketing office, created the Web site template. Lisa Low and Ryan Pharis developed the Web site and Artie Limmer and Joey Hernandez provided the photography, all from the Office of Communications and Marketing. Steve Pitts provided the narration for the videos.

The Telly awards honor the best in local, regional, and cable television commercials and programs, as well as video and film productions and work created for the Web. More than 14,000 entrants in several different categories were received this year from advertising agencies, production companies, television and cable stations and corporations around the world.