The Center for Biodefense, Law and Public Policy at Texas Tech will serve as the Law, Policy and Ethics Core for the WRCE until 2014. 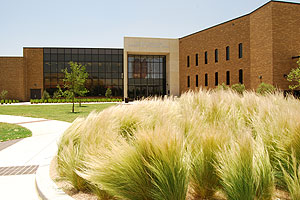 The biodefense center at the Texas Tech School of Law conducts valuable, cutting-edge research and works to establish standards for law and raise public policy issues in biodefense.
Texas Tech University’s Center for Biodefense, Law and Public Policy in the School of Law will once again receive a five-year grant from the National Institutes of Health (NIH) and the Western Regional Center of Excellence (WRCE), despite recent WRCE budget cuts which affected other universities. The biodefense center received funding in 2004 to act as the Law, Policy and Ethics Core for the WRCE for the previous five years and will continue that role through 2014 with the second grant. Established in 2002, the center conducts cutting-edge research that is valuable to the security of the nation as the need to counter bioterrorism increases. Directed by Vickie Sutton, the Center for Biodefense works to establish standards for law and raise public policy issues in biodefense. “I am particularly pleased with the confidence shown in us to continue the research, education and service that we are doing in biodefense and biosecurity law benefiting not only the WRCE but other research centers of excellence throughout the U.S.,” said Sutton. “The grant money will continue to aid the center in conducting research in the areas of biodefense, public health preparedness, biosecurity and biosafety law.” Nearly $256,000, which will be used to maintain daily operation and research, comes to the biodefense center through a grant from the NIH and the National Institute of Allergy and Infectious Disease (NIAID). “Receiving an NIH/NIAID grant is certainly a distinction not only for the law school but for the entire University,” said Guy Bailey, president of Texas Tech University.” As the Law, Policy and Ethics Core for the WRCE, the biodefense center will provide legal counsel on policies and regulations in the areas of publications, primate testing, vaccine approval processes, human subject testing and intellectual property. “The Center for Biodefense, Law and Public Policy has been a unique resource for law students,” said Walt Huffman, dean of the Texas Tech School of Law. “I am pleased to see this continuing benefit from the funding for awarding law students Center Fellowships.” Recently, the biodefense center opened a biosecurity and biosafety law hotline for researchers, safety officers and lawyers. It also has conducted regional and national surveys regarding biodefense research and compliance with the Select Agent Regulations. It is the only law school center in the U.S. to be funded by NIH and NIAID through the biodefense research program.

The Center for Biodefense, Law and Public Policy, in the Texas Tech University School of Law is the only center at a law school in the U.S. to focus solely on issues of law and biodefense, biosecurity and bioterrorism.

In 2004, the law faculty approved the Law and Biodefense Certificate program, a specialty area in the completion of the J.D. degree; the first and only program of its kind in the nation at a law school.

The Western Regional Center of Excellence (WRCE) is an organization of 32 institutions, including 24 universities in Texas, New Mexico, Oklahoma, Arkansas and Louisiana.

It was created to establish a strong infrastructure for research and development in the field of bioterrorism, specializing in generating new diagnostic methods and vaccines.