A look at the contributions Lopez has made to Texas Tech University, from donating his collection of works to developing new educational opportunities. 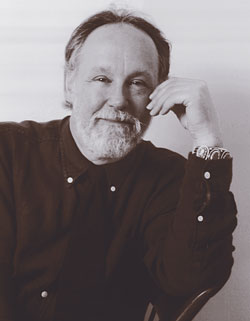 Barry Lopez is known for his works involving human culture and nature. He has been a visiting scholar at Texas Tech since 2003.

Barry Lopez, the award-winning essayist, author and short-story writer, spends most of his time writing and traveling around the world, meeting with scholars, fellow writers and political figures. So why does this internationally-known globe trekker make regular stops in Lubbock?

It’s because Lopez has a special bond with Texas Tech University and has committed himself to giving back in order to enrich the university and the surrounding community. For the past eight years, Lopez has actualized significant academic, multi-cultural and community-based programs and continues to introduce new ideas to advance the university.

Lopez’ affiliation with Texas Tech began in 2001, when he was contacted by administrators to cooperatively develop a new undergraduate major for the Honors College. In collaboration with biologist and two-time Pulitzer-Prize-winning author Edward Wilson, the two developed the university’s Bachelor of Arts in Natural History and the Humanities – a program combining study in the sciences and humanities into a single degree program.

Around the same time, Lopez was approached about preserving his collection of manuscripts, notebooks and field journals in the university’s Southwest Collections/ Special Collections Library. Lopez, who was drawn to the university and the people, accepted, laying the foundation of the James E. Sowell Family Collection in Literature, Community and the Natural World. In turn, Lopez has encouraged other well-known authors such as Rick Bass, Gretel Ehrlich and David Quammen, among others, to follow suit, creating an unprecedented archival collection.

“With Barry’s collection as a magnet, we now have the personal papers of some of the country’s most prominent writers, which constitutes the most important collection in the U.S. of writers who write about the natural world and community,” said William Tydeman, deputy director for development and external relations at the Southwest Collections/Special Collections Library. “It is a great feather in Texas Tech’s hat and part of that prestige factor when you associate great collections with great universities. These are all important steps in the rise of Texas Tech toward tier-one university status.” 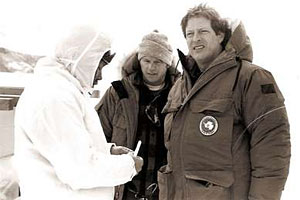 (L-R) Barry Lopez, Ted Clarke and Al Gore at a remote field camp in southern Victorialand in the Transantarctic Mountains in 1988.

In 2003, Lopez was named the university’s first visiting distinguished scholar. Twice a year, Lopez travels to Lubbock to speak and work on projects with faculty, administrators and students. He also works with the community, speaking to Lubbock High School students involved with the international baccalaureate program.

“This isn’t about student recruitment,” Lopez said. “This is about civic relationships in Lubbock and the common cause of educators.”

Lopez is a free-floating spirit of intellectual and creative energy – a sort of muse, able to come and go at will, but always leaving an impression by planting the seed of an idea for others to cultivate. As a non-faculty member, Lopez is in the position to act as a catalyst between the university and the community, sparking new ideas and introducing an outside perspective on issues.

“I feel privileged to be able to work in a way that is not easy for faculty and administrators,” Lopez said. “The function of a visitor, to some extent, is to be able to come to a university and say something that people at the university aren’t able to say.”

When Lopez is not socializing with internationally-known personalities like Desmond Tutu and Al Gore, he’s using his high-profile connections to bring the best minds to Texas Tech through the Formby Lecture Series in Social Justice.

The series, sponsored by the Southwest Collection/Special Collections Library, brings in speakers to address issues of political, economic, environmental and racial justice with the Texas Tech community.

“I realized, when I was working with people internationally involved on issues of social justice, that through those connections I could bring what’s in my world into the university’s world so it serves the students,” Lopez said. “In the end, everything I do I want it to have a positive effect on the students.” 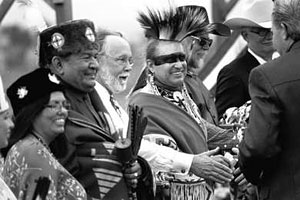 Since his initial introduction to Texas Tech, Lopez’ commitment to the university has only grown. One of the most significant accomplishments the author has helped facilitate is the reconciliation between the university and the Comanche Nation. On Sept. 9, 2007, Lopez along with administrators and other members of the Texas Tech community participated in a unique ceremony which marked the beginning of a collaborative effort between the tribe and the university, which stands on former Comanche ground, to improve educational opportunities for both Comanche youth and Texas Tech.

Some of the projects resulting from the negotiations include an exchange program for faculty and students; oral history and ethnomusicology projects designed to record, collect and archive modern and traditional Comanche history and music for deposit at both the Comanche Nation Museum and the Southwest Collection/Special Collections Library; and an Honors College program to establish a cultural context for plants collected on Comanche lands.

All in a Day’s Work

With the numerous contributions he has made to Texas Tech, Lopez believes he is much too far along in his own world as a writer to think about receiving any credit.

“This is a pleasure for me to come and work with people I respect and listen to people’s ideas,” Lopez said. “When I began this work I saw a way at the right stage in my life to give back. I have been the beneficiary of a lot of goodwill and I have been very fortunate as a writer. So if I am working in concert with the administration to further their goals, then I am here to do whatever I can.”

Lopez plans to continue to propel the university by proposing academic programs and intellectual and educational opportunities for students and the community to learn more about themselves and the world around them.

“You should be able to say, ‘we turn out women and men who think carefully about what they do,’” said Lopez. “And what they do is not our business, but our hope is that they will do it so well people will say ‘I want to go to that school because apparently you learn who you are there.’”

Barry Lopez published his first stories in 1966. Since then, he has received numerous awards for his works, including the National Book Award for "Arctic Dreams."

His essays are collected in two books, “Crossing Open Ground” and “About This Life.”

Lopez is a contributing writer to many publications including National Geographic. His essay “Coldscapes,” which addresses the disturbing phenomenon of melting permafrost in the Arctic, appeared in the December 2007 issue.

The James Sowell Family Collection in Literature, Community and the Natural World at Texas Tech is home to Barry Lopez' manuscripts, field journals, photographs, correspondence and other archival materials.

The Sowell Collection is housed in the Southwest Collection/Special Collections Library. The literary manuscript collection was established in 2001 by James Sowell, a Texas Tech alumnus and past chairman of the Board of Regents.

The program also offers a minor in Humanities.