Ruben Felix's journey through baseball has changed courses several times, but he continues to live out his dreams. 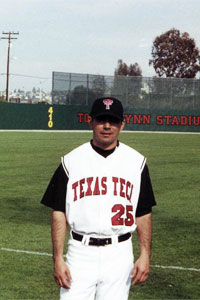 When Ruben Felix goes to work, this Red Raider is happy to wear orange. It’s not that so-called brighter shade of orange you see in Stillwater, Okla., and certainly not the burnt hue the folks around Austin like. For Felix, his color is the orange of summer – Baltimore Orioles orange. Felix spends March through October where he always dreamed he would – in a big league bullpen. A hard-throwing lefty, Felix had his sights set on becoming a major-league baseball pitcher. From the time he started Little League at age eight with his twin brother, Felix has dreamed of baseball.

His route to the major leagues took some time and unexpected turns. He played ball at Howard County Junior College and Lubbock Christian University, and went on to sign as a free agent in 1994 with the Corpus Christi Barracudas of the AA-Texas Louisiana League. That same year, while playing winter ball in the AAA-Mexican Pacific Coast League for the Sugarcane Growers of Los Mochis, Sinaloa, the Milwaukee Brewers purchased his contract. Felix played professionally for six different minor league teams before ending up back with the Barracudas, where he was an All-Star as the team’s closer with a 7-0 record with a league-leading 15 saves and 2.41 ERA. He seemed well on his way to the major leagues. “Being a left-handed pitcher, I thought I had a real chance to make it as a setup guy or closer in the big leagues,” Felix said. But the winter of 1997 changed everything. As many young players do, he played in the Mexican league to sharpen his skills. A freak accident before a game left Felix with a broken ankle and a foot fractured in three places. The injury could have ended the dream of making it to the Big Show, but Felix was not one to give up. He simply rewrote the script. Felix has always been one to plan ahead. While he was out for five months with his injury, he knew his ankle would never allow him to play as he had before. He decided he needed to finish his college degree and find a way back into baseball. 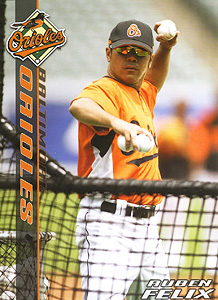 In 2008, Felix joined the Baltimore Orioles as a bullpen assistant.

From Pitcher to Coach

In 1999, Felix enrolled at Texas Tech and became a volunteer coach for Larry Hays and the Red Raider baseball team. “Texas Tech was good for me,” he said. “I got to work very closely with the kids and be around great coaches like Frank Anderson and Larry Hays. I have so much respect for those men, how they talked to the kids. I learned that to be a great coach you have to treat the kids with respect, no matter their talent level. You must treat them all the same and show them that you care about them, on and off the field.” Felix began his coaching days right after graduating from Texas Tech at Lubbock’s Trinity Christian High School. From there, he landed a collegiate job as an assistant coach at Galveston Jr. College in 2001. He then took over as the head coach for two seasons and in February of 2004 was offered a major league job with the Cleveland Indians where he was part of their big league coaching staff from 2004-2006. In 2007, Felix helped coach Team USA 16 and under to a World Championship in Venezuela. that same winter, Felix went on to become the head bullpen coach for the AAA-Tomateros of Culiacan in Mexico. It was there that Felix received a call from Orioles Manager Dave Trembley with a job offer to join his staff in Baltimore. Felix joined the Orioles as a bullpen assistant in 2008.

His hard work with the "Os" earned him a chance to work with Team USA during the 2009 World Baseball Classic. Felix wanted to coach for Team USA and applied. But as the time grew closer for the big leaguers to start practice he had not heard about a job. Then one day, he was pulled from watching pitchers throw in the bullpen during spring training by Trembley and General Manager Andy McPhail. Going in, Felix thought he might be in trouble, but couldn’t think why. As it turned out, they wanted to tell him the good news that Bob Watson the general manager of Team USA Baseball had called the Orioles to asked permission for him to join them as an assistant coach for the 2009 World Baseball Classic. “That call scared me to death,” Felix laughed. “Dave Trembley gave me some great advice before the World Baseball Classic. He said this was a chance of a lifetime, something that could help propel my career for future job opportunities in baseball. He told me I would be part of history and work with the best players and coaches in the world. He told me whether I stayed in Major League Baseball or went to the college ranks, this was something that would help me become an elite coach.” 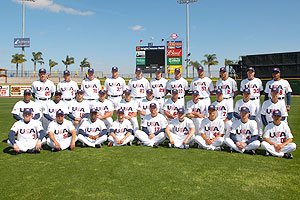 Team USA poses for a photo before the 2009 World Baseball Classic. Click to Enlarge.

The Lessons and Perks

And after the classic, if you ask him what he learned, you’ll get a laugh and a question back: “what didn’t I learn?” It was an experience that he’ll never forget. Besides hanging out with Yankee captain Derek Jeter, Atlanta Braves MVP Chipper Jones and the rest of a team made up of some of the best baseball players in the world, he took many lessons from the experience. He worked with Mel Stottlemeyer, the former Yankee pitching coach. The biggest lesson Felix learned was seeing how a great coach prepares for a game, what goes through Stottlemeyer’s mind as he prepares pitchers for a game. Felix’s spot on Team USA earned him an unexpected introduction to Vice President Joe Biden. The vice president was at the Orioles opening day game against the Yankees. “The general manager brought the vice president through the locker room before the game and introduced me to him as the Orioles representative on Team USA. He shook my hand. It was amazing,” Felix said.

Always the man with a plan, Felix’s future goals range from becoming a major league head bullpen coach or a pitching coach to maybe someday becoming a head coach at a major university. He knows that his major league experience will help him if the right college job comes along, especially at Texas Tech University where he graduated and started his coaching journey. “My major league baseball experience would be of great benefit to any collegiate program in terms of recruiting,” he said. “What you learn in the big leagues is so advanced. I believe those two things would be a huge help in landing a major college position.” His contacts are indeed an impressive roster of all-stars, Hall of Famers and future residents of Cooperstown – the Team USA players and coaches, his Orioles teammates and the players he met playing and now coaching in winter ball. 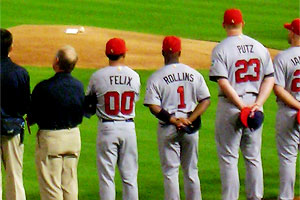 Felix as worked alongside an impressive roster of all-stars and future Hall of Famers.

It was in 1994 that Felix first met his hero, Fernando Valenzuela, the great Los Angeles Dodgers Cy Young and Rookie of the Year award winning pitcher. “He was such an idol to me as a kid. Here was this Hispanic, hard-throwing lefty who was so successful," Felix said. "I wanted to be just like him. Then I met him and my respect intensified. He is so humble and gracious and very helpful. He is a big influence in my life. He is so excited I’m coaching in the big leagues. He told me to remember that there are a million guys trying to get where I am now and to not jeopardize that – to work as hard as I can. Everyday when I go onto the field I think about that and what a blessed individual I am.” Eddy Murray, the "Os" Hall of Fame first baseman, and All-Star shortstop Omar Visquel, now with the Texas Rangers, have also had a major influence in Felix’s life. “I think I’ve learned the most as a coach from Omar. The way he goes about the game is what’s so inspiring. He is dedicated to the game on the field and off. I want to carry that attitude on with me as a coach and as a person,” Felix said.

While the dream has changed focus a couple times already – and may again – Felix always remembers his parents telling him that dreams aren’t impossible; they are what you make them. “I believe I’m living my dream now because I made it possible by working as hard as I can as a player and as a coach. It’s something I’ll always do. Fernando told me ‘that the day you stop learning about baseball is the day you stop getting better.’ I’ll always keep that in mind,” he said.