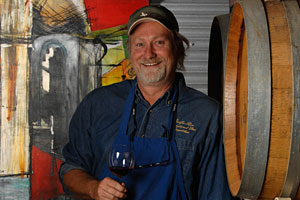 Alumnus Kim McPherson, founder of McPherson Cellars in Lubbock, graduated from Texas Tech with a degree in food nutrition.

It isn’t time to panic – not yet, anyway.

True, it’s bottling day at the hip new home of McPherson Cellars Winery in downtown Lubbock and the operation is at a standstill. Wine bottles are gathering air in their boxes and the gleaming stainless steel Bertolaso bottling line is sitting idle as it awaits a replacement part.

But this is no big sweat for Kim McPherson, a man with decades of Texas vintages practically pumping through his veins. After all, his father is Clinton “Doc” McPherson, considered the father of the modern Texas wine industry, which makes Kim something like its older brother – a blood relative, for sure.

So after clanking around for a few minutes with his ponytail whipping around behind him, Kim simply hops in his pickup, drives off in search of the needed parts, and an hour later everything is humming along again.

Dressing in a Bottle

If anyone could claim a lineage in Texas wines, it’s Kim, whose chemistry professor father knocked skeptics on their heels in 1976 when he and another Texas Tech University professor not only founded the first winery in Texas since Prohibition, but watched it flourish.

The two professors confounded longstanding beliefs that the state’s climate is too rough and rowdy for the exacting science of winemaking and turned a humble experiment in the university’s Chemistry Building basement into the Llano Estacado Winery.

In doing so, they opened the door for a rush of new winemakers that have turned Texas into one of the nation’s biggest wine producers.

Yet Kim started down a different career path than his father.

“Growing up, I spent years watching Dad make wine in the garage and I didn’t get that into it,” he said.

Instead he graduated from Texas Tech with a degree in food nutrition and spent his first year out of school trying to figure out how to bottle another popular dinner plate companion: ranch dressing.

Kim went to work for a research and development company and spent a year trying to capture the condiment’s twang in a recipe that could sit on grocery store shelves – something that wasn’t available at the time. 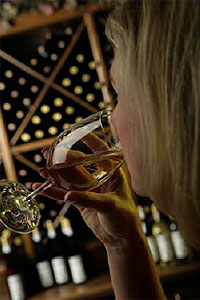 McPherson's winemaking philosophy is based on approachability, making fun wines to enjoy without the intimidation factor.

“Ranch dressing was popular, but the only way you could get it was by mixing mayonnaise with buttermilk in the kitchen,” he said. “We were trying to get that ranch dressing flavor in a bottle.”

But when Kim found himself without a job after that, his father gave him a not-so-subtle nudge:

So he did, studying enology and viticulture and working in Napa Valley before returning to Llano Estacado and later moving to Caprock Winery in Lubbock.

He founded McPherson Cellars in 2000 in tribute to his father but avoided tying himself to a tasting room as many wine producers do, opting instead to lease space in existing wineries and grow his client base by distributing wholesale to restaurants.

That ended recently when Kim opened the first part of a lavish new facility in the former Coca-Cola bottling plant in the Depot Entertainment District.

There, visitors can ogle the crown jewel of Kim’s collection: that Bertolaso bottling line. It snakes through the winery like a prop absconded from a Jetsons set, a sci-fi assembly that whirls and gleams amid naked brick, looking more sculptural whimsy than serious industrial machinery.

Which means it fits perfectly in the revitalized plant, snuggling amongst the artfully busted-out walls and man-tall canvases to create a funky, if harmonious, blending of organics and mechanics that feels, well, much like a finely crafted wine.

In fact, the location exudes the same tasteful coziness that has made La Diosa Cellars, the bistro and wine bar located just a street away, a popular destination for Hub City hipsters.

No real surprise, considering that the La Diosa’s founder and owner, Sylvia McPherson, is Kim’s wife. Sylvia has merely applied her skills to a much larger swath of building this time – a winery consuming half a block of downtown real estate and featuring not only a tasting room but an outdoor courtyard and eventually even an outdoor chapel.

Not a wine collector himself, Kim points out that most wines are bought by women and consumed within hours of their purchase.

His strategy involves what he refers to as planting the land, meaning he focuses on varietals that thrive in West Texas rather than trying to coax unwilling if pedigreed grapes out of the soil.

He wants to make a fun wine, something that people can sit down and enjoy without being intimidated, he said.

Texas Tech University, located in the heart of the High Plains region, offers education and research oportunities to those interested in the wine and grape industry.

The Texas Wine Marketing Research Institute in the College of Human Sciences offers undergraduate and graduate students a unique opportunity to develop expertise in wine marketing and economic development research.

The College of Outreach and Distance Education offers a certification program in viticulture, which focuses on commercial grape production and professional work in the viticulture industry. Find out More.

Students majoring in horticultural and turfgrass sciences also will have a new degree option in viticulture and enology. Courses will be available beginning Fall 2009.

Wine and Winter: A Good Pair