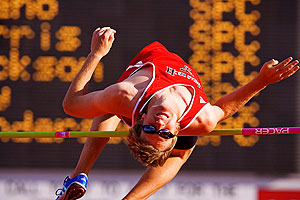 In 2008, Texas Tech began a year-long, campus-wide self study of its athletics programs as part of the NCAA Division I athletics certification program.

A designation of certified means that an institution operates its athletics program in substantial conformity with operating principles adopted by the Division I membership.

“The self-study opened the athletic department up to review by the rest of the campus community,” said President Guy Bailey. “Our athletic department runs very well, and this certification demonstrates our commitment to the principles of integrity, equity and academic excellence espoused by the NCAA.”

The results follow a year-long, campus-wide study of Texas Tech athletics programs initiated in February 2008 as part of the NCAA Division I athletics certification program. It included a review of these primary components: governance and commitment to rules compliance; academic integrity; equity; and student-athlete well-being.

“We appreciate the Campus Certification Committee led by Provost Bill Marcy for its hard work and effort during this process,” Texas Tech Director of Athletics Gerald Myers said. “The NCAA Peer Review Committee evaluated all areas of the athletic department. We are pleased that Texas Tech was certified in all areas without conditions.”

Texas Tech completed its first certification self-study in 1999 and was unconditionally certified by the NCAA.

The NCAA announced Texas Tech’s status among 35 Division I member institutions that have undergone the association’s second cycle of athletics certification.

The following 35 institutions were certified:

In addition, two Division I institutions have been certified with conditions: Grambling State University and Howard University.

This classification means the institution is considered to be operating its athletics program in substantial conformity with operating principles adopted by the NCAA's Division I membership. However, problems identified during the course of the institution's self-study and the peer-review team's evaluation were considered serious enough by the Committee on Athletics Certification to cause it to withhold full certification until those problems have been corrected.

The members of the Committee on Athletics Certification are: