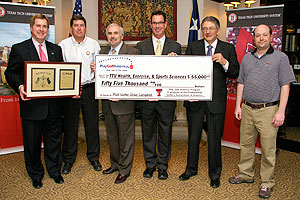 This is the second time that Campbell has designated funds to Texas Tech through the Ryder Cup Outreach Program. With this year’s contribution, the total donated by Campbell is $55,000.

Campbell, a member of the 2008 winning Ryder Cup team, is a native of Andrews. His wife Amy graduated from Texas Tech in 1999 with a bachelor's degree from the College of Education.

Texas Tech will use the gift to fund additional personal fitness and wellness classes offered in the Department of Health, Exercise and Sport Sciences. The golf courses use a specific PGA-approved curriculum.

The Play Golf America program is designed to teach and engage students in the game of golf through PGA professional instruction and other golf programs. Since 1999, when the program began, $13 million has been donated on behalf of the team to 130 player-designated charities and 38 colleges and universities.