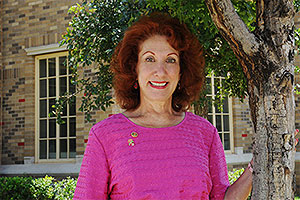 Sheryl Santos became dean of the College of Education at Texas Tech in 2003. She plans to take a one year sabbatical and return to a faculty position in 2010.

Sheryl Santos, dean of the College of Education, announced April 7 that she is stepping down from her post effective June 1.

Santos, who has served as dean for six years, told faculty and staff in the college that she will be married and will then take a one-year sabbatical before returning in the fall of 2010 to a faculty position.

“Life is about transition, change and renewal,” Santos said. “I think the timing is right for the college to seek new leadership under a new provost and president in order to meet the challenging demands of the future.”

Provost Robert Smith will name an interim dean in the next few weeks.

“Even though I have only worked with Dean Santos for a short time, I have come to appreciate her caring dedication to the College of Education,” Smith said. “It is certainly clear to me that she has placed the interests of the college above her personal concerns during her time as dean. Such unselfish service is greatly valued by this provost.”

Santos was named dean of the College of Education in July 2003. Before coming to Texas Tech, Santos was dean and professor of the School of Education at California State University, Bakersfield. She earned her bachelor’s and master’s degrees from Queens College in New York City and her doctorate from Kansas State University.