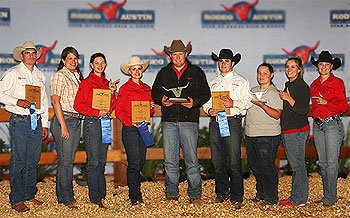 For the second year in a row, Texas Tech equestrian teams have finished first and second at the Star of Texas Fair competition in Austin.

While many party-hearty spring breakers were hitting the beach, Texas Tech University’s Ranch Horse Team was continuing its winning ride to the American Stock Horse Association National Championship Show, which will be held April 25 at the Texas Tech Equestrian Center.

Fresh off a strong March 5 performance at the first of the collegiate spring season’s stock horse shows in Abilene in which the Red Raiders’ Black and Red Teams finished first and second, respectively, the intra-squad teams switched places March 16 winning the Star of Texas Fair competition in Austin for the second year in a row.

“It was a great day for us, as we once again had the Champion and the Reserve Champion Team and the top five individuals out of 44 contestants,” said Kris Wilson, Ranch Horse Team coach and an assistant professor with Tech’s Department of Animal and Food Science.