Red McCombs to be Honored as 2009 Boss of the Plains

Red McCombs will be honored on May 15, for his professional success and support of the of the National Ranching Heritage Center. 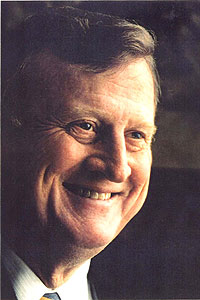 San Antonio businessman Red McCombs has been selected to receive the 2009 Boss of the Plains Award from the Ranching Heritage Association, based in Lubbock. It will be presented during an award dinner following a 6:30 p.m. reception, May 15, at the Lubbock Country Club, 3400 Mesa Road.

The annual award recognizes McCombs’ generosity to the National Ranching Heritage Center (NRHC) museum and historical park. Created in 1999, the Boss of the Plains is presented annually and reserved for individuals who are highly regarded in their professions and who have provided noteworthy support for the NRHC.

A charter member of the RHA’s National Advisory Board, McCombs has provided financial support toward several of the Heritage Campaign projects, including making possible the impressive Red McCombs Main Gallery in the museum’s new north addition.

A well-known businessman, McCombs was born in Spur, and attended Southwestern University and the University of Texas at Austin in both the School of Business and School of Law.

McCombs is the former owner of the NFL Minnesota Vikings, the NBA Denver Nuggets and the San Antonio Spurs, which he secured for the city in 1972. At age 25, he purchased his first professional sports team, the Corpus Christi Clippers in the Big State Baseball League.

McCombs married the former Charline Hamblin in Corpus Christi in 1950. Their daughters, Lynda McCombs, Marsha Shields and Connie McNab, and their families, including eight grandchildren two great-grandchildren, all reside in San Antonio.

The Boss of the Plains comes from the Stetson Hat Co., whose founder, John B. Stetson, created the first true hat of the American West. The hat and its name were the first registered by Stetson in its long and colorful history. Stetson, recognizing the significance of the Boss of the Plains Award, authorized its use and its name to honor those who lead the way in supporting the National Ranching Heritage Center.