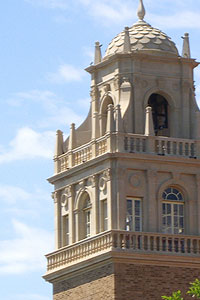 This is the second time the doctoral program has been included in the top 100 rankings by U.S. News & World Report.

The Clinical Psychology Doctoral Program in the Department of Psychology was ranked fourth in Texas and 92nd in the nation by the recent review of the nation’s top colleges and universities by U.S. News & World Report.

In the past six years, the program has jumped 22 slots in the ranking to earn 92nd place, said David Rudd, chairman of the Department of Psychology.

“Last year was the first time we’ve ever had our graduate program ranked in the top 100,” Rudd said. “It's a great accomplishment given that the rankings are based on academic reputation, particularly for doctoral programs in clinical psychology with more than 400 such programs nationally. It confirms we have a highly productive and respected faculty.”

In Texas, Texas Tech’s program comes behind that of University of Texas at Austin, ranked 16th, and Texas A&M and University of Texas Southwestern Medical Center’s programs, both ranked 71st.  Rudd said department leaders plan to continue growing and improving the program, which lacks a mere .2 on its score to tie with A&M and the medical center’s ranking.

The graduate rankings were calculated based on a weighted average of 10 indicators including student selectivity, research activity, faculty resources and assessments by peers and recruiters. They can be found at U.S.News & World Report Web site.

The Department of Psychology is part of the College of Arts and Sciences at Texas Tech.

Professor Examines the Science Behind Suicide in New Book