Roman Taraban will travel to Kharagpur, India to conduct research at the Indian Institutes of Technology. 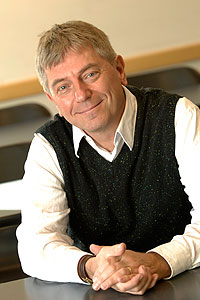 Roman Taraban will spend the 2009-2010 academic year in India working on cross-cultural research on engineering education.

A Texas Tech University expert in the psychology of learning has been awarded a Fulbright Scholar grant to do research at the Indian Institutes of Technology (IIT) in Kharagpur, India, during the 2009-2010 academic year.

Roman Taraban, the associate department chairman of the Department of Psychology, will conduct cross-cultural research on engineering education, comparing practices in India to those in the U.S. He becomes the third Texas Tech faculty member to receive a grant this year.

“The Indian Institutes of Technology are regarded worldwide as premier institutions for training engineers,” Taraban said. “As a cognitive psychologist, my goal is to compare the cognitions and mental processes of engineering students in the U.S. to those in India, with the goal of understanding how students attain professional excellence through their educational training programs. Popular culture has brought cross-cultural differences in education to the forefront in "2 Million Minutes," showing that Indian students spend significantly more time on academics than American students. That may be part of the answer.”

David Rudd, chairman for the Department of Psychology, said the Fulbright grant brings prominence to Taraban’s studies in educational psychology and engineering education.

“This is a well-deserved award for Dr. Taraban,” Rudd said. “He is a genuine international leader in science education and outcomes. This award will provide a unique opportunity to further his research agenda with international collaborators in India.”

The Fulbright Program, America’s flagship international educational exchange program, is sponsored by the United States Department of State, Bureau of Educational and Cultural Affairs. Since 1946, it has provided 108,160 Americans who have studied, taught or researched abroad and 178,340 students, scholars and teachers from other countries who have engaged in similar activities in the United States with the opportunity to observe each other’s political, economic, educational and cultural institutions, to exchange ideas and to embark on joint ventures of importance to the general welfare of the world's inhabitants.

The Council for International Exchange of Scholars, under a cooperative agreement with the United States Department of State, administers the Fulbright Scholar Program for faculty and professionals. Each year, the traditional program sends some 800 U.S. faculty and professionals to 140 countries to lecture, research or participate in seminars. At the same time, approximately 800 foreign faculty members come to the United States each year.

The Department of Psychology is part of the College of Arts and Sciences at Texas Tech.