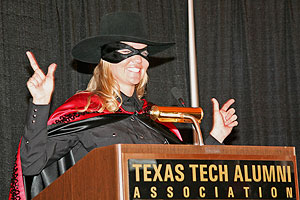 Brianne Aucutt-Hight will take the reins to Midnight Matador for 2009-2010, realizing a childhood goal.

In donning the rider’s mask, Aucutt-Hight, a senior animal science major with a specialization in production from Clovis, N.M., realizes a goal she set as a child after her parents attended a Red Raider football game and brought her an autographed card from the Masked Rider.

“The Masked Rider represents a great Texas Tech tradition and I am honored to have been selected for such a prestigious position,” she said.

As the Masked Rider, she will make hundreds of appearances and put thousands of miles on the Masked Rider’s pickup as she crisscrosses the Southwest to promote Texas Tech spirit and goodwill at athletic events, parades, rodeos and other functions.

She held the Masked Rider’s reigns during a historic year for Texas Tech in which the football team defeated top-ranked Texas in a Lubbock shootout to clinch the university’s first no. 2 national ranking. She had appearances on "60 Minutes" and during "College Game Day’s" first trip to Lubbock and made the Masked Rider’s first run at a Texas Tech Baseball game.