Researchers expect India's cotton production to increase over the next 10 years, causing the country to bump China from the number one spot. 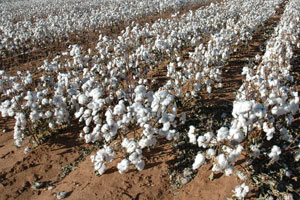 CERI at Texas Tech provides cotton economic analysis for policymakers and others interested in agricultural economy, and conducts research on all aspects of cotton production, marketing, trade and processing.

India became the second largest cotton producer in the world two years ago, and annual forecasts by Texas Tech University agricultural economists predict it will remain in that position for years, climbing to 25.3 million acres in the next decade, up from 23.1 million acres now.

“Harvested cotton area in India is projected to jump due to the high net return in cotton and high minimum support prices recently announced by the Indian government,” Hudson said.

As a result of the faltering global economy, demand for textile products dwindled and cotton prices began to tumble last fall. In response, India's government increased the minimum support price it provides its cotton farmers by 35 percent to 45 percent.

India’s production gains are projected to come from both increased areas and improved yields. The upward trend in yield is projected to continue as more Bt cotton varieties are approved for cultivation, as varieties are adopted to a wider range of cotton growing areas, and as utilization rates increase.

“One of the things that has been responsible for the tremendous increase in cotton production in India has been their rapid and overwhelming acceptance of the new genetically engineered varieties of cotton,” said Norman Hopper, Texas Tech’s Associate Dean and Piper Professor in the College of Agricultural Sciences and Natural Resources.

In 2003, India was a net importer of cotton despite having the world’s largest planting acreage. While the nation might have planted a lot of cotton, it also had one of the world’s lowest yields per acre. Six years later, India’s cotton yields have soared, thanks largely to the introduction of Bt cotton.

Bt crops have been genetically altered to produce toxins that kill some insects. The toxins are produced in nature by the widespread bacterium Bacillus thuringiensis, hence the abbreviation Bt.