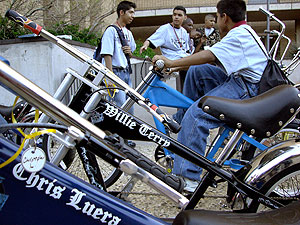 Sixteen Atkins Middle School students each received a bike to assemble and redesign into a unique lowrider creation.

What starts as a young artist’s idea and ends in a creative form of colorful, chrome-coated self-expression will take to the roads at 5:30 p.m. April 24 for the fifth Lowrider/Dream Bike Parade on the Texas Tech University Campus.

This year’s event will begin in front of the east entrance of the Art Building, located at 18th Street and Flint Avenue. In a parallel project, associate professor of art Will Canning’s sculpture students will exhibit their bicycle-inspired, kinetic artwork. The two groups met in February and exchanged ideas as the project began.

At the parade, Carol Edwards, dean of the College of Visual and Performing Arts, will recognize the 16 students from Atkins Middle School and the 10 undergraduate visual studies majors for their achievements. Also, she will honor others like the Sigma Alpha Epsilon Fraternity, who donated or assisted with this program.

“This outreach project is a reflection of the commitment of the college and the School of Art in working collaboratively with area institutions to broaden the impact of Texas Tech in our educational community,” Edwards said. “We are proud of our faculty and students who care deeply about educational opportunities for all of our school children. Projects such as this one forge relationships and provide solid foundations for strong community-based programs.”

This is the fifth year the School of Art has partnered with a school from the Lubbock area in presenting an art bike project, and the second year that Atkins Middle School has participated, said Future Akins-Tillett, assistant professor of visual studies. The program serves as a form of community outreach.

Atkins is 79 percent minority, and 78 percent of students come from economically disadvantaged families. Prior to last year, the school was working to remediate its 2007 School Accountability Rating of Academically Unacceptable based on Texas Assessment of Knowledge and Skills (TAKS) scores.

By the end of the project last year, 62 percent of the students that had not been acceptable in math TAKS had improved to acceptable. Several other students who participated in last year’s lowrider bike program expressed a desire to attend college.

“I think this program works because it is about the students, about their culture and it is a real project with various stages that have to be completed before the next step can be taken,” Akins-Tillett said. “It is great to have them at Texas Tech, to encourage them to begin thinking about college and to simply know there are people here who care about them and respect their heritage and popular culture.”

A Mixture of Art, Science and Engineering

The middle school students began planning their dream bikes in February and painting began in April. Through the process, Akins-Tillett said the students learn art and design, which includes a practical application of physics and math. In addition to designing, the students work with mentors and attend a bike safety camp and discussed healthy life styles that focused on nutrition and exercise.

“The mentors have made a huge difference,” she said. “They were in the classroom with the kids from Atkins twice a week, getting to know them, helping them push their ideas, aiding them in dreaming and believing in their dreams. It is moving to see how hard the students have worked and how excited they are to finally receive their bikes. This year, each student from Atkins will have a working bike – a means of transportation and a way to live a healthier lifestyle.”

The program is in cooperation with Atkins art teacher Lyn Brown and Atkins principal Chris Huber.

Huber said he and his staff look forward to the same sort of results this year.

“In addition to supporting the goal of improving student achievement, the project served to provide our students with role models from diverse backgrounds, experiences and academic fields of expertise,” he said.

The program received a Crystal Award by Texas Association of Partners in Education for its outstanding work with volunteers and the results achieved by the students.

Later this year, the middle school students will mentor students at Bean Elementary School discussing their bike project and encouraging the younger students to stay in school.

Dream Bikes Give Students a Boost