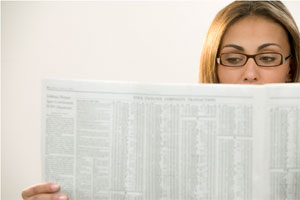 Journalism experts at Texas Tech say the economic downturn and the changing media landscape could produce a more evolved, smarter and adaptable media. Metro USA, a media company with daily newspapers in New York, Boston and Philadelphia, announced its intentions March 30 to cancel its contract with the Associated Press effective April 1. While many may view such actions as more evidence of the extinction of major daily newspapers and the old world order of media, two Texas Tech University journalism professors see it as the dawning of a media rebirth – one that will mimic the phoenix.

Rising From the Ashes

The economic downturn and the changing media landscape will surely have its list of casualties, said Randy Reddick, chairman of the Department of Journalism in the College of Mass Communications. However, smart and adaptable media will survive the mass extinction to come out as a different product that evolved from today’s circumstances. “We are seeing traditional news media, particularly large daily newspapers, having to redefine themselves,” Reddick said. “And they are going to become, according to the new buzzword, ‘hyper-local.’ The community newspapers are doing fine. But the metros and large suburban papers are laying people off because they’re bloated and in today’s market often irrelevant. “What may happen out of this, is that these redefined smaller news organizations are going to create some kind of cooperative among themselves, which ironically is exactly what the Associated Press was originally and still is today. But it’s grown big and cumbersome and overgrown and maybe somewhat irrelevant again for today’s hyper-local markets.” Tom Johnson, the Formby Regent’s Professor of Convergent Media, said that doesn’t mean that people won’t get or seek out international and national news. And it doesn’t mean that large metro newspapers won’t supply customers with that information. However, the difference will come by linking their readers to other places to find that news rather than producing it themselves. “One of the problems of the big metro papers, such as The New York Times, is they’ve tried to be all things to all people,” he said. “Honestly, more and more people are less concerned about international and national news and more about ‘what is going on in my community.’ I think that you may see more newspapers realize they’re not doing what they should be doing best, which is local, and link to the rest. That’s where newspapers can thrive. They are the authoritative source of news. But they’ve got to see themselves as a distributor as well as a creator.”

Perhaps the paper you hold in your hand will become a thing of the past, too, he said. While many still like the tactile feeling of a newspaper, media businesses are realizing that print is expensive. Some papers have closed their pressrooms and switched to online only. Some may publish online during the week, but keep the weekend print editions. Johnson said that a recent study showed the New York Times could give all its subscribers the $350 wireless electronic reading device, called a Kindle, and still cut its costs by half. “Printing is incredibly expensive,” he said. “Printing and transporting cost a lot, and you will see people getting away from print. Environment is another big reason. Even though there are people who like to turn pages of a newspaper, they also don’t like idea of killing trees.” One thing is certain, said Reddick. The large daily will have two choices: Adapt or die. “The large metros as you and I know them are probably dead,” he said. “Or will be within the decade. I think people are still going to want to read them. They’re probably going to be smaller, focus mainly on local things and tie back to their Web site. They’ll also have to take these cavernous buildings and repurpose them, or they will be monstrous albatrosses around their necks. They’ll have to repurpose these multi-million-dollar printing presses, too. They’ll have to bite a lot of bullets and literally downsize and repurpose, or they won’t’ survive. Someone will fill that vacuum, though, if they don’t survive.”

Randy Reddick is the chairman of the Department of Journalism in the College of Mass Communications.

Tom Johnson is the Formby Regent’s Professor of Convergent Media in the College of Mass Communications.

The College of Mass Communications at Texas Tech enrolls more than 1,500 undergraduate students majoring in: