Brent Newsom, doctoral student in Creative Writing, is the recipient of a 10-month Fulbright Award to the People's Republic of China starting in Spring 2010. 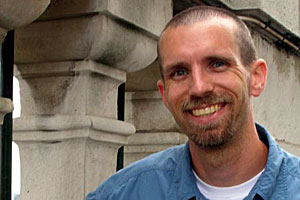 Newsom, who is working on his doctoral degree in creative writing, received the grant to complete a novel while living in China. Tentatively titled “Saving Face,” Newsom’s novel follows an American man who abruptly moves to China in order to escape the difficulties of his crumbling marriage. He will begin his 10 month stay in Jan. 2010.

Newsom received one of the 1,498 grants available for the 2009/2010 grant cycle, according to the 2009/2010 U.S. Student Fulbright brochure. He noted on his application that “immersion in Chinese culture and interaction with Chinese citizens will be integral to making this novel of cross-cultural concern detailed, vivid and realistic.”

The creative writing program is part of the Graduate Program in English at Texas Tech. Graduate students may pursue the master's or doctoral degree in English and focus studies in several areas from American literature to linguistics, depending upon interests and professional goals.

The faculty in creative writing are working writers with numerous publications and awards, and they are distinguished mentors and teachers who work closely with graduate students to help them meet their goals and aspirations.

Find out more about the Creative Writing Program at Texas TechGo>>

The Department of English at Texas Tech is part of the College of Arts and Sciences.