She is a research associate professor in the Department of Geosciences in the College of Arts and Sciences. 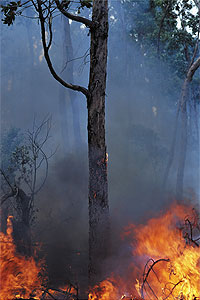 As global warming changes weather patterns, scientists have found a way to find where wildfire hotspots may crop up around the world.

When it comes to global warming and wildfires, the bad news is that rising temperatures and shifting rainfall patterns that accompany climate change will make some areas more susceptible to outbreaks.

The good news is that by using thermal-infrared data from satellites, a group of scientists at University of California, Berkeley, and Texas Tech University has identified common characteristics associated with present-day global fire activity that may serve as predictors for future wildfire hotspots. The results of the study were published April 7 in the journal PLoS ONE.

“As we looked at wildfire around the world, we wondered whether we could identify common factors that control its activity,” said study author Katharine Hayhoe, an atmospheric scientist and associate professor in the Department of Geosciences at Texas Tech. “The fact that we have identified these characteristics means that we can use climate models to simulate how those same characteristics are likely to change in the future.”

The research was conducted with support from The Nature Conservancy as part of the organization’s effort to consider wildfire effects when developing plans to protect biodiversity.

Jim Bergan, a Texas Tech alumnus and The Nature Conservancy’s director of science and stewardship in Texas, said that understanding wildfires now and in the future is important to protect life and property as well as to keep nature in balance.

“Restoration through fire is an integral part of the conservancy’s work and is especially important in a large and diverse state such as Texas,” Bergan said. “As this report shows, our changing climate also means significant changes in fire patterns around the world. We need to act quickly to share information globally to help others understand the shift in wildfire risk and how managed burns are critical to protect wildlife habitat and private property.”

This is the first attempt to quantitatively model why we see fire where we see it across the entire planet, said project investigator, Max Moritz, co-director of the University of California Center for Fire Research and Outreach.

“The two essential suites of variables needed for fires include the presence of sufficient vegetation to burn and the window in time when conditions are hot and dry enough for ignition to occur,” he said.

The researchers then used simulations of how climate change may alter these two essential variables, based on scenarios of lower and mid-range future emissions developed by the Intergovernmental Panel on Climate Change, to examine future changes in fire activity. They found that climate change is likely to significantly alter fire activity across most of the planet in coming decades.

Preliminary results for the period 2010 to 2039 show hotspots of fire invasion forming in the parts of the Western United States and the Tibetan Plateau. In contrast, the likelihood of wildfires may decrease for some regions such as Northeast China and Central Africa.

A decrease in fire risk isn’t necessarily a good thing, either, researchers said. 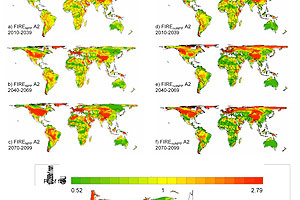 Researchers found some areas such as the Western United States and Western Europe, will become more prone to wildfires in the coming century. Other areas, such as Central Africa and Southeast Asia, will become less susceptible to wildfires. Click to Enlarge.

“Some species of trees rely on fires occurring at specific times to regenerate,” said lead investigator Meg Krawchuk, a postdoctoral fellow from the University of California, Berkeley. “Any changes in a fire regime have the potential to dramatically alter the landscape over time.”

Previous models of fire activity have focused on specific regions, including Southern California and Southeast Australia. In 2006, a report from Australia’s national science agency warned that climate change could increase bushfire risk in that region. Three years later, a record-breaking heat wave that sent temperatures soaring 20 degrees above average occurred on top of the longest, hottest drought in the region’s history. These conditions, consistent with those expected under climate change, set the stage for the deadliest fire in Australia’s history.

“What Australia showed us is that things can happen faster than we think,” Hayhoe said. “Although we cannot yet say whether climate change played a role in the February fires in Australia, we do know that climate change will increase the risk of conditions conducive to such devastating wildfires in the near future.”

While climate change will alter future wildfire risks, most wildfires are started by human activity or by lightning, she said.

“For that reason, we’re trying to determine where climate change may be figuratively piling up wood and tinder, creating the perfect conditions for when that match drops or a lightning bolt strikes,” Hayhoe said.

The researchers said this paper is a first step toward developing a comprehensive picture of how climate change will alter fire risk around the world if substantial cuts in greenhouse gas emissions do not occur soon. The next step, using a wider range of climate projections, will identify consistent patterns of change. Subsequent calculations will use a broader range of climate projections to develop reliable predictions for specific regions.