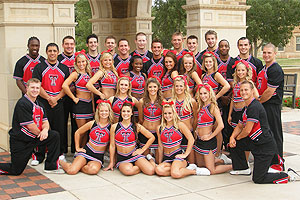 More than 10,000 cheerleaders, dancers, coaches and fans assembled April 8-11 for the event, which featured some 200 college teams competing in 20 divisions.

The Cheer Squad snagged perfect scores in tumbling and collegiate image – or how well the team represents Texas Tech sportsmanship and integrity – as it claimed third place of nine teams invited to compete.  The squad’s former top ranking was fourth place in 2002.

The Pom Squad, in its first year under new coach Rachel Levetzow, claimed 10th place in the Dance Division – four spots above the team’s former best of 14th.

“We were pleased with the finish,” said cheer coach Joshua Anderson. “We have been working to establish a nationally competitive program, and while we still have room for growth, I thought we did well against tough competition.” 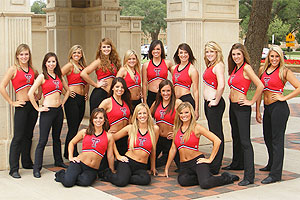 The Pom Squad placed 10th in the Dance Division at the national competition. Click to enlarge.

Anderson took over the coaching position in 2007 with the goal of taking the squad back to Daytona Beach after a five-year hiatus. Texas Tech claimed fifth place that year and again in 2008. This year the squad edged behind Oklahoma State University by less than a point for second place and won the Innovative Choreography Award.

With only three cheerleaders leaving the team and a fresh batch of replacements after a year of heavy recruiting, Anderson said the program is poised to build on the success.

Texas Tech hired Levetzow in 2008 to lead the pom program. She took over a squad that had been without a coach for a year and said she is focusing on rebuilding the program.

“I think the squad did very well this year,” she said. “Everyone has been pushing and working hard, and we will continue to improve from here.”

To view videos of Texas Tech's 2009 cheer and dance routines, go to Varsity.com and search for Texas Tech.

Watch the Cheer Squad compete in the 2005 national competition