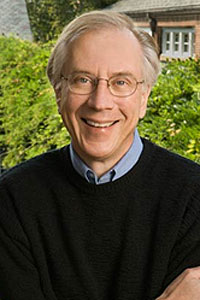 Thomas Cech is one of the world’s leading experts on RNA and its catalytic activity.

A Nobel laureate in chemistry will discuss how research into the tips of our DNA chromosomes could lead to cures for rapidly-growing cancerous tumors and the possible origins of life.

Thomas R. Cech, a co-recipient of the 1989 Nobel Prize in chemistry for his RNA research and former President of the Howard Hughes Medical Institute in Maryland, will give an 11 a.m. public seminar followed by the 2009 Haragan Lecture Series at 7:30 p.m April 15. Both events are organized by the Howard Hughes Medical Institute Undergraduate Science Education Program at Texas Tech University.

The series will coincide with the birthday of the series’ namesake, Donald R. Haragan. Following the evening lecture in the Allen Theatre of the Student Union Building, organizers will honor the former Texas Tech president with a party in the lobby. Parking is free to the first 160 vehicles in the R-11 parking lot on the south side of the Music Building.

Life at the End of Chromosomes

The morning seminar in Lecture Hall 100 of the Biology Building is titled “Life at the End of Chromosomes: Telomeres and Telomerase.” Telomeres are basically caps at the end of chromosomes with no important genes, but critical to capping off chromosomal material and protecting it from degrading or getting altered, he said. Telomerase is an enzyme that copies those caps.

“Cancer cells, particularly in order to undergo rapid growth, have to turn on the telomerase enzyme,” Cech said. “So, while telomerase is good for us in our early development, it can turn into a bad thing when it promotes tumor growth. Slowing down telomerase is a potential cancer therapy.”

The Origin of Life

For the Haragan Lecture Series, Cech will discuss the possible origins of life and prebiotic reproduction in “The Origin of Life: RNA and Ribozymes.” In the 1980s, Cech discovered that RNA lives two very different lives. Science at the time knew that RNA serves as an information messenger for DNA of a cell, he said. But his work found that RNA also can work as a catalyst for chemical reactions in the cell – something thought at the time to be done only by protein enzymes.

RNA’s duality has made scientists wonder if it could even pre-date DNA when it comes to the origins of life on the planet.

“The fact that RNA has this dual life where it can carry information and make things work in cells is an interesting hanger to hang scientific information on,” he said. “At the origins of early life on the planet – we’re not talking about humans, we’re talking before there were any cellular organisms at all – how did the first self-reproducing system get started? It seems an attractive answer that RNA could have been replicating itself, since it both carries information and serves as a catalyst. Proteins and DNA could have come later.

“That’s something that I call a scenario. There’s no way to test how life started on planet earth. We don’t have any fossils that tell us what life was like 4 billion years ago before there were even primitive bacteria. We just have to keep our hypotheses of what is chemically possible.”

Lou Densmore, director of Texas Tech’s HHMI Science Education Program, said Cech’s RNA work was one of biology’s most important discoveries of the last part of the 20th century. He ranked it with Watson and Crick’s discovery of the double-helix design of DNA and DNA sequencing as one of the most discipline-changing discoveries of the past 50 years.

“In my opinion, he is the most important and the most influential scientist that has come to Texas Tech to speak,” Densmore said. “But not only that, he has worked tirelessly as a major national scientific figure to champion undergraduate research opportunities. Texas Tech is the first place he will talk since he stepped down as president of HHMI, and we are honored to have him here.”

Started in 1992, part of Texas Tech’s HHMI program allows students to work with faculty research scientists, providing students with new opportunities in research and hands-on science projects. The other student component supports science education scholars and enhances important outreach efforts to help teachers in Lubbock and across the state.

Texas Tech is the only university in Texas to receive continuous funding from HHMI. The $7.8 million awarded is the most received by any Texas institution, and ranks Texas Tech in the top tier of HHMI-supported research universities.

"Life at the End of Chromosomes: Telomeres and Telomerase"

“The Origin of Life: RNA and Ribozymes.”