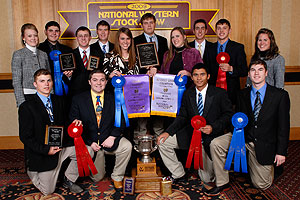 The Houston competition was the final contest for the Wool Judging team for the spring semester.
Click to Enlarge.

Texas Tech sent two wool judging teams to the Houston contest – the Red Team and the Black Team – since only four students can compete per team. The Houston competitions were the final contests for both the Wool Judging and Livestock Show teams for the spring semester.

The total roster of team members include:

The team is coached by graduate student L.J. Ashorn and Moriah Beyers, a coordinator in the Department of Animal and Food Sciences. Sam Jackson, associate professor, supervises the program. Officials said the wool judging team serves as the beginning level for students participating in judging teams at Texas Tech. After wool judging, students normally move to meat judging, then livestock judging.