A majority of Texans list having a healthy marriage as a top priority in life, but many younger and Hispanic couples may need help keeping their knot tied. 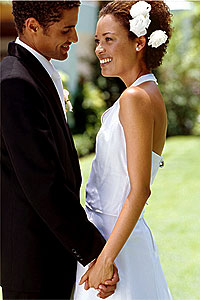 Around 90 percent of the people surveyed agreed that having a healthy and happy marriage is one of the most important things in life.

Healthy Relationships Month is underway, focusing attention on issues such as building stronger marital bonds. Yet are Texans really equipped to create or – more importantly – sustain the nuptial bliss?

Steven M. Harris, professor of marriage and family therapy at Texas Tech University and the man who headed the team that developed the baseline for the marriage attitudes in Texas, has some insights into the subject.

In the Twogether in Texas report compiled for the Texas Health and Human Services Commission, a statewide and multicultural slate of participants dished up their thoughts on marriage, divorce and the bumps that sometimes lead from one to the next. And while a majority of Texans listed having a healthy marriage as a top priority in life, a significant number of younger and Hispanic couples may require help keeping the knot tied, researchers found. Yet there was a silver lining, because these couples also were more open to the idea of relationship education. “Despite being at risk for attitudes that are indicative of divorce, those two cohorts also are more interested in couples’ communication exercises,” Harris said. “One of the things I found is that people value and want healthy relationships but they don’t see many models around them to emulate.” Around 90 percent of survey respondents agreed that having a healthy and happy marriage is one of the most important things in life and nearly as many said marriage is a lifelong commitment that should only be broken under extreme conditions. Yet 37 percent of the 2,003 respondents had experienced a divorce, and report authors noted that respondents between the ages of 18 and 44 and those who identified themselves as Hispanic tended consistently to hold opinions and engage in behaviors that put their marriages at risk. Those who had gone through a divorce listed lack of commitment, falling out of love, affairs and too much arguing among reasons for their split even though most of those surveyed said they typically work things out with their partner after an argument. The statewide survey established a baseline for the attitudes toward marriage and family life of 24 million Texans and was used to help guide the state’s Twogether in Texas initiative, which, among other things, waives the $60 marriage license fee for couples who complete an eight-hour premarital class. The initiative is the most ambitious undertaking by a state, Harris said, with the eventual goal of providing counseling sessions once a month in every Texas county.

Steven Harris is a professor of human development and family studies in the College of Human Sciences at Texas Tech University.

Researchers in Texas Tech’s College of Human Sciences in cooperation with a number of other universities compiled and analyzed data for the Twogether in Texas report.