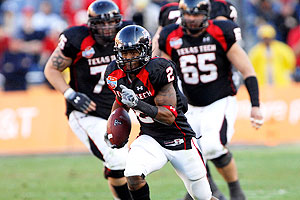 The Red Raiders will meet the Baylor Bears for their 67 meeting in 2009 at the new Dallas Cowboys' stadium in Arlington.

Texas Tech and Baylor will take their next two football games to North Texas, beginning with the 2009 game, originally scheduled for Waco. The teams will meet at the Dallas Cowboys’ new stadium in Arlington this fall and play the second of the two-year agreement at the Cotton Bowl Stadium in Dallas during the State Fair in 2010.

The Red Raiders and Bears will play Nov. 28 this year and Oct. 9, 2010, the following season. Tickets for this season’s game at the Cowboys’ stadium are $100 for club seats; $60 for lower bowl seats; $40 for upper bowl seats; and $25 for Texas Tech and Baylor students.

Mayor Robert Cluck of Arlington said "Arlington is proud to be the host of this classic in 2009. It will be a great rivalry for years to come, and we are so pleased that the first game will be in the great new Cowboy stadium here in Arlington."

"We are thrilled to have yet another big game in the historic Cotton Bowl Stadium in Fair Park," said Dallas Mayor Tom Leppert. "It's an excellent opportunity for college recruiting, and with the game being played during the State Fair of Texas, we're confident the Red Raiders, the Bears and their fans will turn this into a new State Fair tradition."

With over 50,000 alumni and students in the Dallas/Fort Worth area, Texas Tech Director of Athletics Gerald Myers points to the move as an opportunity to “give a game to our fans and alumni in the metro area.” The game in Dallas/Fort Worth will give the program more visibility in the area and enhance the university’s recruitment of students to Texas Tech.

“We are pleased to have the opportunity to play a football game in the new Cowboy stadium in 2009 and the Cotton Bowl Stadium during the Texas State Fair in 2010,” Myers said. “It is an opportunity to showcase Texas Tech and our football team to fans, alumni and prospective students in the Dallas/Fort Worth area. The exposure and media coverage of the games will greatly enhance Texas Tech’s recruiting efforts in the metroplex area, which is one of the nation’s recruiting hotbeds, and an area that has produced some of the top players in our program’s history.”

Texas Tech recently completed the most successful regular season in school history with an 11-1 record and a share of the Big 12 Conference South Division title. The Red Raiders placed four players on All-America first teams last season and created some of the most memorable moments in the program’s history. Tech recorded its first win over a top-ranked opponent, when it knocked off Texas, 39-33, in Lubbock and boasted single-season records in wins (11) and conference wins (7).

Texas Tech and Baylor have a long-standing tradition against one another with the Red Raiders leading 34-32-1. Texas Tech has won each meeting with Baylor, since the two teams joined the Big 12 Conference in 1996. The Bears’ last win was a 9-7 victory in Waco in 1995.