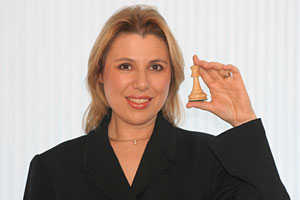 Grandmaster Susan Polgar is the executive director of SPICE at Texas Tech University. The four-time Women's World Champion is the only world champion in history to win the Triple Crown of chess.

Susan Polgar, director of the Susan Polgar Institute for Chess Excellence (SPICE) at Texas Tech University, was appointed as co-chairperson of the Commission for Women’s Chess by the World Chess Federation (FIDE).

Polgar will co-chair the Commission for Women’s Chess alongside the current World Chess Champion Alexandra Kosteniuk from Russia.

“We hope to influence policies when it comes to women’s events and help get sponsorships and raise visibility and recognition for women’s chess,” Polgar said.

Polgar has been a pioneer for women’s chess since childhood and has continued since arriving at Texas Tech. She has spent the last few years focusing on promoting the game of chess rather than playing.

“I consider it a great honor that the World Chess Federation chose me as the most qualified person to co-chair the committee,” Polgar said. “Women’s chess has progressed tremendously in the past two decades, and it shows great promise for the future of women’s chess.”

The World Chess Federation is recognized by the International Olympic Committee as the supreme body responsible for the organization of chess and its championships at global and continental levels.

What it Feels Like...To Recruit Chess Players in Dresden Germany